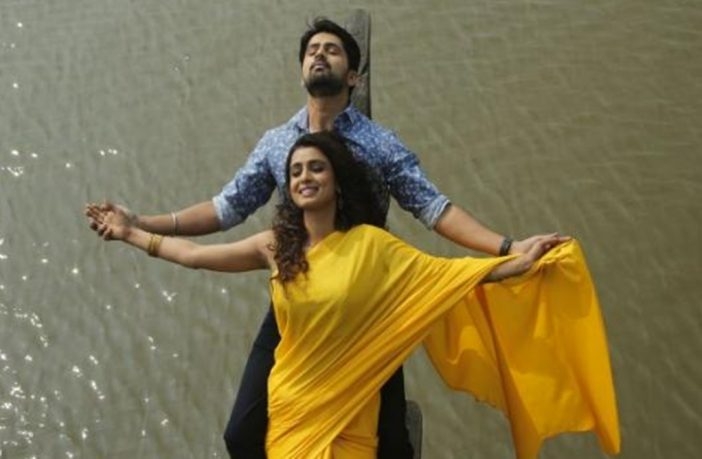 An irregularly engaging, largely uninspiring drama, this film is about a theatre director Makarand Sawant (Shashank Ketkar) who while aiming for a big chance in films, gets struck down by accidental tragedy and eventually finds his way out of the enveloping darkness. Along the way he loses his Bank Manager father (Vivek Lagoo), finds a soul mate in Mugda (Mayuri Deshmukh), gets a chance to direct a film for a big Production House, Meghraj Productions (represented by Raju Kher) and learns the most vital lessons of his life from Meera (Reena Agarwal), the Principal of a Blind School.

The narrative chugs along from one event to another at a middling pace, sharing mini-conflicts and tears on it’s way to a film-in-film climax where the blind director is shown orchestrating a fiery end play that suddenly goes horribly wrong – through no fault of his. The ending has the director using his lessons in the blind school to manoeuvrer his way out of a sticky life-threatening situation.

‘31 Divas’ alludes to the time taken by the newly blind director to train himself and get back on track so that he can complete the movie left incomplete by the accident. But that’s merely 15-20 minutes of the narrative, the rest is largely exposition. There appears to be an imbalance of sorts in the structure and treatment here. The character arcs and performances though are believable. Shashank Ketkar tempers his performance with adequate reason and emotion, Mayuri Deshmukh is competent as Makarand’s supportive spouse and Reena Agarwal is believably fluent as the Principal of the Blind school. Director Ashish Bhelkar’s earnestness is appreciable, but his narrative’s ability to arouse interest and emotion is debatable at best!