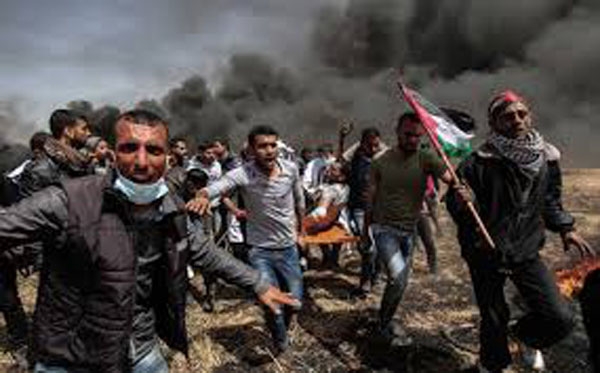 Jerusalem : About 20,000 Palestinians participated in protests dubbed the “Friday of Tires” along the Israel-Gaza border.  During the violent confrontations with Israeli border soldiers on Friday, eight Palestinians were killed and about 1,300 others wounded, reports Xinhua news agency.

Earlier on Friday, the UN human rights office deplored the reported use of “excessive force” by Israeli soldiers during the March 30 protests in Gaza, where at least 16 people were killed and more than 1,000 others injured.  Friday’s protest, however, was smaller in scale than that of last week, which was estimated to bring together about 30,000 Palestinians.

The Israeli military responded with riot dispersal means, and fired in accordance with the rules of engagement, the Israeli Defence Forces (IDF) said in a statement. Attempts were made by Palestinians to infiltrate into Israel under the cover of a smoke screen, in addition to explosive devices and firebombs thrown toward IDF soldiers and attempts to damage the security fence, the IDF said.

“The IDF will not allow any harm of the security infrastructure or the security fence that protects Israeli civilians, and will act against the violent rioters and terrorists who attempt to do so,” it added.

The Israeli military on Thursday threatened Hamas with a tougher military response to another planned Friday demonstration on Israel’s border with Gaza.  The six-week protest campaign “March of Return” to mark Land Day, is an annual commemoration of a 1976 protest against Israeli confiscation of Arab-owned land.

Jerusalem: The number of Palestinians killed by Israeli security forces during protests in the Gaza Strip has climbed to 10 while over 1,000 others were wounded by bullets, Palestinian officials said on Saturday.

The incident occurred on Friday when the Israeli Army opened fire on protesters near the border with Israel, Efe news reported. Gaza Health Ministry spokesperson Ashraf Al Qedra confirmed that 10 people had died during the clashes. He added that 1,354 people were wounded, including 491 by ammunition and explosives.  The so-called “March of Return” campaign convened by Palestinian factions in Gaza started on March 30 with demonstrations, marches and sit-ins near the border with Israel. Since then, 32 Palestinians have died in the Gaza Strip, reports IANS.The six-week protest campaign to mark Land Day, is an annual commemoration of a 1976 protest against Israeli confiscation of Arab-owned land.Israel deployed snipers along the border fence and warned it would not allow anyone to cross or approach, or put the security of its citizens in danger.