165th anniversary of first Indian Railway is celebrated at Thane 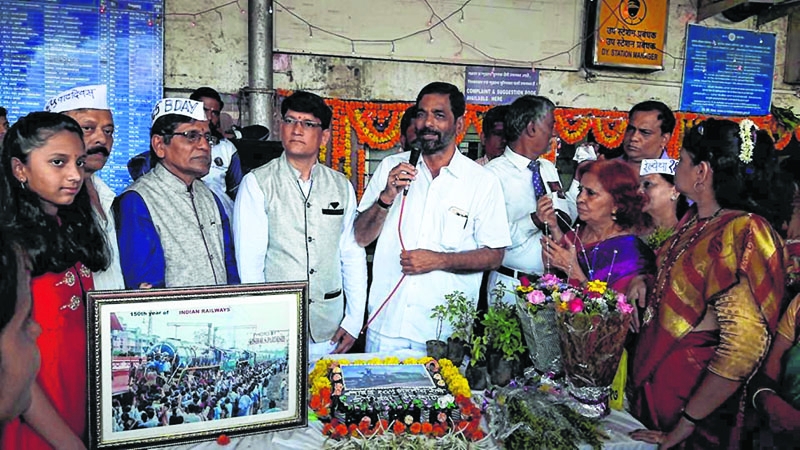 Thane: The replica of first steam engine that ran in India will soon the centre of attraction at the Thane station, informed the passenger association who had gathered to celebrate the anniversary of the day when the first Indian railway ran between Thane and Bori Bunder.

India’s first train ran from Thane to Bori Bunder in Mumbai on April 16, 1853. It has been 165 years since and on this occasion, passenger associations had proposed the installation of old steam engine as a memorabilia, if not a world class rail museum at Thane. Thane’s passenger representatives had submitted a letter to the Union Railway Minister Piyush Goyal on April 12 demanding the same. The letter states the local passenger associations have been demanding at least a steam engine to be installed at Thane station and requests for directions to the local railways for the same.

“As it is the Transport Museum at CSMT is most likely not to come up. With Thane-Bori Bunder being the first rail route, as a token of history, we asked the minister to at least keep a steam engine for public view,” said Nandkumar Deshmukh, president, Thane Railway Pravasi Sangh. Passenger associations claim that despite Thane holding historical relevance for Indian Railways, it remains in a poor condition. There was a proposal to convert Thane into a world class station, which barely took off. “Everyday around 5-6 lakh people travel via Thane through main (CSMT-Kalyan) and trans-harbour (Thane-Vashi) lines. Despite this, the station is neglected and facilities provided are insufficient,” added Deshmukh.

The BJP MLA Sanjay Kelkar along with passengers association and rail commuters celebrated ths day in grand way. A cake was cut and people who worked with the railways were felicitated. Kelkar then declared that there has been positive reply from railway minister about the memorabilia. Besides, there were other programmes too that marked the historical day at Thane station.