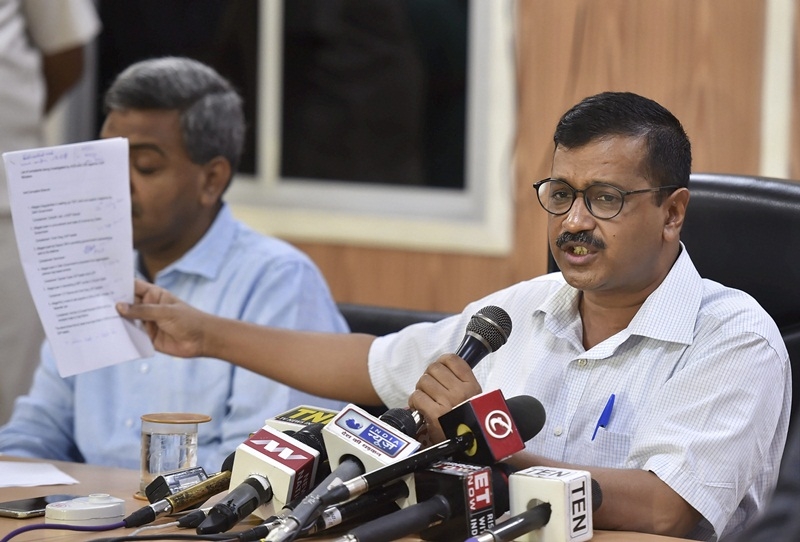 New Delhi: Chief Minister Arvind Kejriwal and his cabinet colleagues spent night at the Lt Governor’s office as they remained there since the last evening for their demands including a direction to IAS officers to end their “strike” and action against officers who have struck work for “four months”.

Kejriwal along with his deputy Manish Sisodia and two other ministers – Gopal Rai and Satyendar Jain – met Lt Governor (L-G) Anil Baijal at 5.30 pm yesterday and since then, they have stayed put at the L-G office. Last night, the chief minister, who is a diabetic, had to take insulin during the sit-in and got “specific food” from his home, sources said.

It is the first time in the history of Delhi that the chief minister and his cabinet colleagues spent night at L-G office to press for their demands. Kejriwal tweeted at 6.27 am from the L-G office, saying “My dear Delhiites, good morning. Struggle continues”. A number of AAP MLAs, party’s leaders and workers have also camped near the L-G office, and the police have barricaded the area. However, the L-G office slammed Kejriwal’s sit-in, saying it is another protest in the sequence of “dharna without reason”.

A statement, issued by Baijal’s office last evening, stated that the L-G was “threatened” to summon officers and issue directions to them to end their “strike” immediately. In the morning, a letter, signed by Kejriwal, Sisodia, Rai and Jain, was sent to Baijal, asking him to take all necessary steps to end the “strike” by IAS officers including issuing written orders that all those officers who do not return to work will be proceeded against and “if necessary, ESMA may be invoked”.

According to the government, IAS officers have been on strike since the alleged assault on Chief Secretary Anshu Prakash and are boycotting meetings with AAP ministers due to which public works are getting affected. However, the Officers association claimed that no officer is on strike and no work has been affected. The letter, written by four ministers to Baijal, starts with “On behalf of the people of Delhi, we are here (L-G office) before you (Baijal) today”.

“Good Morning @LtGovDelhi Sir! Delhi CM and 3 ministers are still waiting in your waiting room since yesterday evening. “We hope today you’ll get time from your busy schedule to resolve these three issues . Till then we are waiting…,” Sisodia tweeted. In the letter, the ministers have also demanded to take exemplary action against those who have “stalled” till now.

The Delhi Cabinet also demanded the L-G’s approval for AAP goverment’s proposed doorstep delivery of ration scheme. “Handed him this letter. L-G refuses to take action. L-G is under constitutional duty to act. Left wid no option, we have politely told LG that we will not leave till he acts on all points. “We hv come out of his chamber n sitting in his waiting room (sic),” Kejriwal tweeted last evening after he along with his three ministers started their sit-in.

Kejriwal along with Sisodia, Rai and Jain met Baijal had last evening demanded that the L-G direct the IAS officers to call off their “strike” and punish those who struck work “for four months”. He also asked the L-G to approve his government’s proposal on doorstep delivery of rations scheme. “In the history of independent India, this is the first time that IAS officers on strike for four months. Why?” he had questioned yesterday.

He also asserted that the scheme on doorstep deliver of rations should be implemented as it will help people and remove corruption. “We have been urging Hon’ble L-G for last many months but LG refused,” he had said. The AAP dispensation claimed that several efforts were made to end the “strike” by IAS officers due to which government work has been suffering in past four months.

Sisodia had yesterday said that he met and wrote to the L-G five times about the strike but he did “nothing” to end it. “How can elected govt work, if Hon LG supports IAS officers strike like this,” he tweeted from Raj Niwas last evening. The AAP government and the bureaucracy have been at loggerheads since the alleged assault on Chief Secretary Anshu Prakash by AAP MLAs at Kejriwal’s residence on the intervening night of February 19-20.