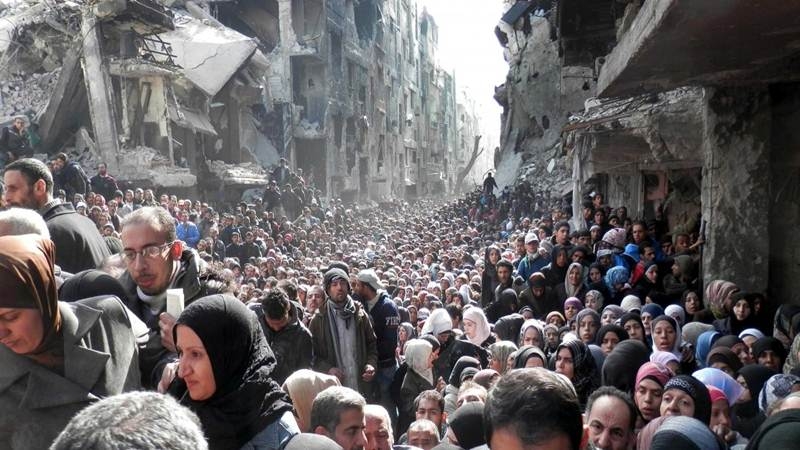 Damascus: At least 100 civilians, including 20 children, were killed and hundreds wounded as Syrian government forces bombarded rebel-held Eastern Ghouta area outside Damascus, a war monitor said. The Eastern Ghouta is the last remaining opposition-held enclave near the capital and is completely surrounded by areas under government control.

The UK-based Syrian Observatory for Human Rights (SOHR) said at least 470 people were injured, some critically, in a barrage of airstrikes, rocket fire and artillery slammed into towns across Eastern Ghouta on Monday. If confirmed, it would make Monday one of the deadliest days for the district since it came under siege in 2013 by the government of Bashar al-Assad and subjected to devastating chemical attacks, the BBC reported. Four hospitals, including a maternity facility, were also bombed in the area, reports said. “We are standing before the massacre of the 21st century,” said a doctor. “If the massacre of the 1990s was Srebrenica, and the massacres of the 1980s were Halabja and Sabra and Chatila, then Eastern Ghouta is the massacre of this century right now.”

He added: “A little while ago a child came to me who was blue in the face and barely breathing, his mouth filled with sand… I don’t think they had what we do in any of the medical textbooks. A wounded child breathing with lungs of sand. “It’s not a war. It’s called a massacre,” the doctor told the Guardian daily. “The situation in Eastern Ghouta is akin to the day of judgment,” said Mounir Mustafa, the deputy director of the White Helmets, the volunteer group that rescues people from under the rubble of bombed buildings.

Urging a halt to the bombardment, a UN official said the situation was spiralling out of control.  The attacks on the Eastern Ghouta area since Sunday have hit not only civilians but also their means of survival, targeting bakeries and warehouses. Aid workers said the attacks targeted major roads in the area, which will block any aid or rescue operation and hinder the movement of ambulances. “It is a humanitarian catastrophe in every sense of the word. The mass killing of people who do not have the most basic tenets of life,” said an official at the Union of Medical and Relief Organisations, which runs dozens of hospitals in areas controlled by the opposition in Syria.