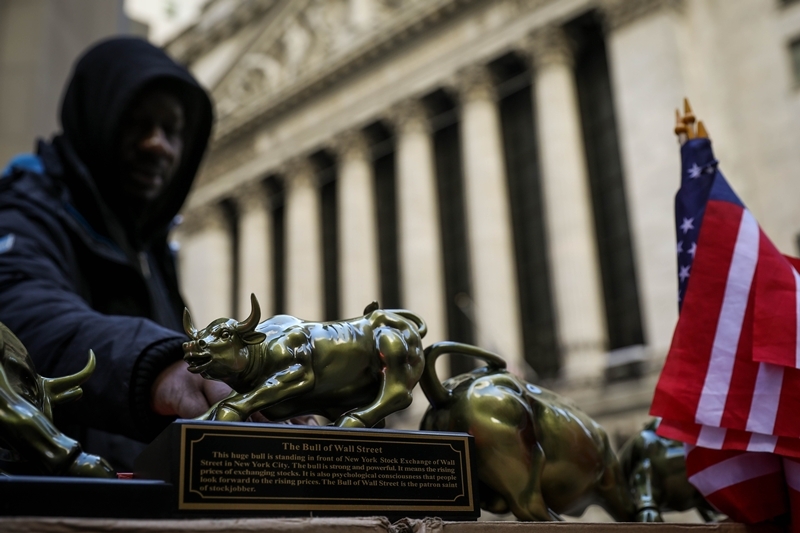 The S&P 500, which groups the top 500 US stocks, and the tech-heavy Nasdaq Composite both rose about 2 percent each for the week while the broad-based Dow Jones Industrial Average rose 1 percent. |

Wall Street scored its biggest week since June as strong retail sales boosted the risk appetite of equity market investors, despite surging inflationary pressures on the US economy.

The S&P 500, which groups the top 500 US stocks, and the tech-heavy Nasdaq Composite both rose about 2 percent each for the week while the broad-based Dow Jones Industrial Average rose 1 percent. It was a second straight week of gains for the three indexes, putting a floor under a market that had a wobbly start for the fourth quarter as inflation from rallying commodity prices led to sharp swings in stocks since the start of October.

Friday's run-up came after US retail sales numbers for September released by the Commerce Department showed a growth of nearly 14 percenton the year and a steady monthly expansion of 0.7 percent since August.
Economists polled by US media had expected a monthly decline of 0.2% for September retail sales due to challenges from the coronavirus pandemic, especially inflation. But almost every key sector of the economy saw positive sales instead, showing promise ahead of the holiday shopping season between October and December.
"Wall Street was expecting a slowdown in spending, but it turns out the US consumer is not to be messed with," Ed Moya, analyst at online trading platform OANDA, said. "Retail sales might moderate next month, but early holiday is happening and Americans seem poised to spend big this holiday season."
Stocks had, in fact, been on a roll since Thursday when minutes from the Federal Reserve's policy meeting in September made clear that the US central bank intended to begin by November or December its stimulus taper and conclude the exercise by the middle of 2022. Uncertainty on when the Federal Reserve would begin the taper had weighed on markets for months, given the beneficial impact to risk-taking from the central bank's monthly buying of bonds and other assets to the tune of $120 billion a month.
A new pandemic-era in weekly US jobless claims and better-than-expected US corporate earnings for the third quarter also boosted stocks on Thursday.
In Friday's trade, the S&P 500 settled at 4,471, up 33 points, or 0.8%. The blue-chop indicator already rose 1.7% on Thursday, which was already the index's biggest one-day gain since March 5. For the week, the S&P 500 rose 1.8%, its most since the week that ended on June 18.
The Nasdaq Composite, comprising Big Tech names such as Facebook, Amazon, Apple, Netflix and Google, closed at 14,897, up 74 points, or 0.5%. For the week, Nasdaq rose 2.2%, its biggest such advance since the week to July 16.
The Dow, comprising mostly industrial-based value stocks, finished Friday's session at 35,295, up 382 points, or 1.1%. For the week, the Dow rose 1.6%, its most since the week ended June 18.