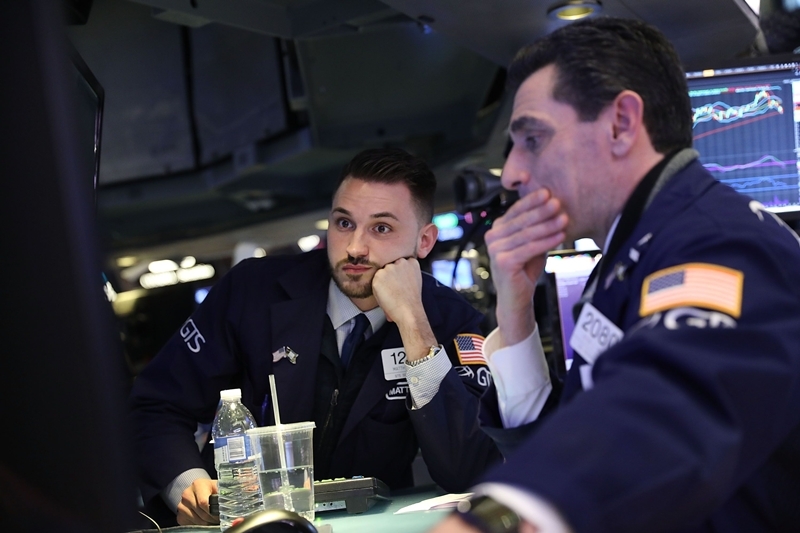 NEW YORK, NY - FEBRUARY 08: Traders work on the floor of the New York Stock Exchange (NYSE) moments before the Closing Bell on February 8, 2018 in New York City. As Wall Street continues to worry about future inflation and rising interest rates, the Dow Jones Industrial Average fell over 1,000 points for the second time this week. Spencer Platt/Getty Images/AFP == FOR NEWSPAPERS, INTERNET, TELCOS & TELEVISION USE ONLY == |

All but one of the 30 components of the Dow closed lower. All the 11 primary S&P 500 sectors closed lower, with consumer discretionary and technology down 2.23 per cent and 1.94 per cent, respectively, leading the laggards. Of the S&P 500 member stocks, 60 per cent ended up in the bear market territory on Wednesday after the Federal Reserve announced its decision to raise short-term interest rates by a quarter of a percentage point.

“In view of realised and expected labour market conditions and inflation, the (Federal Open Market) Committee decided to raise the target range for the federal funds rate to 2-1/4 to 2-1/2 per cent,” the Fed said in a statement after concluding a two-day policy meeting.

It marked the Fed’s fourth rate hike this year and the ninth such move since late 2015, as the central bank moves forward on the path of monetary policy normalization. Meanwhile, during a press conference, Fed Chairman Jerome Powell indicated the Fed was likely to raise rates twice in 2019. Investors fretted over the interest rate spike, fearing that rising borrowing costs could slow down the economy, experts noted.