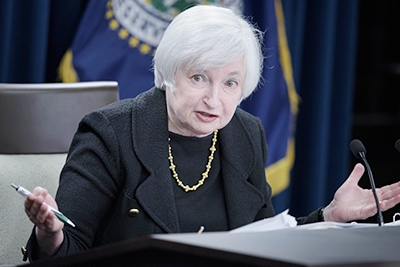 October 18 remains the date US Treasury Secretary Janet Yellen said she is likely to run out of resources to stave off an unprecedented default on the nation's debt without congressional action to raise the debt limit.

On Tuesday (October 5), she rejected the idea of minting a $1 trillion coin to avoid a default.

Appearing on CNBC, Yellen said that if a default were to occur, “I fully expect it would cause a recession as well” along with preventing the government from paying benefits to 50 million Social Security recipients and meeting the government's other bills.

She said it would be “catastrophic” if the government did not have the resources to pay its bills.

Yellen flatly rejected a novel idea that has been put forward to mint a $1 trillion coin and use that to avoid a default on the debt.

“I am opposed to it and I don't be believe we should consider it seriously,” she said.

“The platinum coin is the equivalent of asking the Fed to mint money to cover the debt,” she said. She said what needs to be done is for Congress and the administration to show they can be trusted to pay the country''s bills.

On Monday, President Joe Biden said he could not guarantee that the US government will not default on the debt as he sought to put more pressure on Republicans to stop blocking a Democratic effort to raise the debt ceiling.

Senate Majority Leader Chuck Schumer, D-N.Y., has said he will try to get legislation passed to raise the debt limit before the deadline but will need Republicans in the Senate to agree not to block the effort through a filibuster.