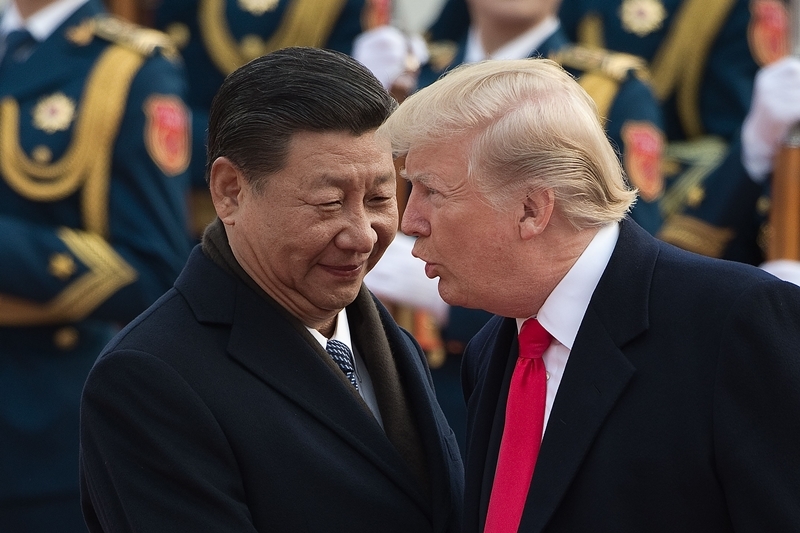 China's President Xi Jinping (L) and US President Donald Trump attend a welcome ceremony at the Great Hall of the People in Beijing on November 9, 2017. / AFP PHOTO / NICOLAS ASFOURI |

Beijing: The extended US-China talks to resolve the trade war between the world’s two largest economies concluded here on a positive note Wednesday with a senior American official describing the dialogue as “good one” for the US. A US delegation arrived in Beijing on Monday for the first face-to-face dialogue with officials in Beijing since President Donald Trump and his Chinese counterpart Xi Jinping agreed to a three-month tariff truce during a meeting held on the sidelines of the G-20 summit in Argentina on December 1.

The US delegation was supposed to end its visit on Tuesday. However, the two-day vice-ministerial talks were extended till Wednesday which China said reflected the seriousness of the negotiations. “It’s been a good one for us,” Ted McKinney, US Under Secretary for Trade and Foreign Agricultural Affairs, said after the talks concluded. The discussions “went just fine”, he said without elaborating, the Hong Kong-based South China Morning Post reported. Meanwhile, confirming the conclusion of the trade talks, China’s foreign ministry spokesman Lu Kang told a media briefing that “the extension of the talks indicates that both sides are serious about this consultation”.

“If the results of the talks are positive, it would be beneficial for both China and the US and also a good news for the global economy,” he added. Analysts said the positive momentum of the talks will need to be followed up by more senior officials. Signals from the latest round of talks were upbeat, the Post report said.