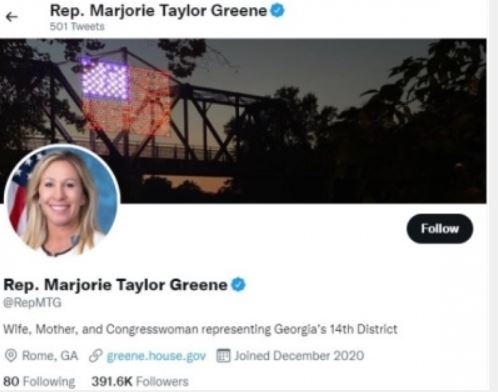 Twitter has permanently suspended an account of US Congresswoman Marjorie Taylor Greene, the Republican Representative from Georgia, for "repeated violations" of the micro-blogging site's COVID-19 misinformation policies.

Under Twitter's COVID-19 misinformation policy, users are given up to five strikes for spreading potentially harmful and misleading information before their accounts are permanently suspended, reports Xinhua news agency.

Sunday's move came months after Twitter has temporarily suspended Greene in August 2020 for tweeting about vaccine misinformation, according to a report by San Francisco Chronicle.

Responding to the permanent suspension, Greene said it proved that Twitter is "an enemy to America", the BBC reported.

In a statement posted to the social media outlet, Telegram, she said "social media platforms can't stop the truth from being spread far and wide" and accused Twitter of aiding unidentified enemies in "a Communist revolution".

Greene has stirred controversies by being a vocal supporter of former President Donald Trump's unsubstantiated claims that the 2020 presidential election was rigged and was also associated with the QAnon conspiracy theory, the BBC said.

She has frequently called into question the efficacy of vaccines and has regularly been fined for refusing to follow COVID-19 guidelines in Congress, including those regarding mask-wearing on the House floor.