Cargo volume at Kandla's Deendayal Port is expected to cross 133 million metric tonne this fiscal as the shipment has hit the record 34.41 MMT in the first quarter, a top official said on Monday.

"As of today we are 6 million tonnes higher compared to last year. So if everything goes normal, we will be reaching 133 MMT (by this fiscal)," Deendayal Port Authority (DPA) chairman SK Mehta told reporters at a roadshow here.

DPA deputy chairman Nandeesh Shukla said the port has handled close to 42 million tonnes of cargo till date in this fiscal, and the growth has come on the back of wheat exports in that period which is usually considered as weak in terms of shipment volume.

DPA, which is developing a container terminal and multi-purpose cargo berth at the facility as part of its expansion plans, conducted the roadshow here to attract investment for the two projects.

"We are going for an ambitious project of setting up a container terminal. We are focusing on different strategic areas. There is a huge rush for our port owing to various factors, including its strategic location, the business-friendly environment, enabling infrastructure and the cheapest cost," Mehta said.

The port said it is set to develop two mega cargo handling terminals on a BOT (Build, Operate and Transfer) basis under Public-Private Partnership mode at an estimated cost of Rs 5,963 crore.

The container terminal, being developed at Tuna-Tekra in the Kutch district, is estimated to cost Rs 4,243.64 crore.

The multipurpose cargo berth is expected to come up at an investment of Rs 1,719.22 crore, and it would have an optimal capacity of 18.33 million metric tonne per annum, DPA said.

The proposed facility will be used for handling shipments of foodgrains, fertilisers, coal, ores and minerals, and steel, among others. 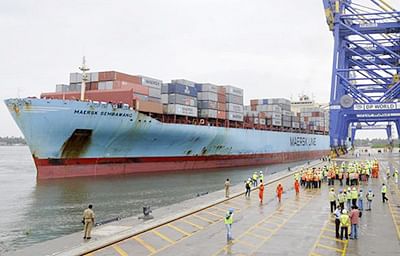