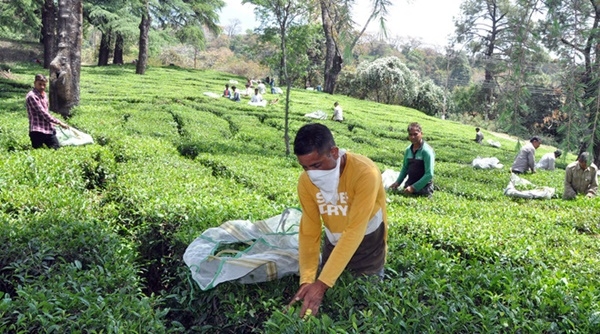 The tea industry in Assam, which contributes roughly 55 per cent to India's total tea production, is struggling for survival due to prices falling below the cost of production (CoP) and much less production of crop due to the COVID-induced situation, leaders of North Eastern Tea Association (NETA) said on Wednesday.

According to NETA, Assam's total tea production in 2021, from January to June, was less by about 41 million kg, which is about 19 per cent less compared to the same period in 2019.

NETA adviser Bidyananda Barkakoty said that on one hand the price realisation of tea is lower by Rs 44.19 per kg, which is about 18 per cent lower compared to last year, while on the other hand, the CoP has gone up due to hike in wages of labourers and input costs.

Therefore, the net negative impact on the industry so far is to the tune of Rs 76 per kg of made tea, said Barkakoty.

NETA Chairman Sunil Jallan said that average price realisation of CTC (crush, tear, curl) tea at the Guwahati Tea Auction Centre (GTAC) this year, from April to July, was Rs 208.02 per kg, whereas it was Rs 252.21 per kg during the same period last year.

"Therefore, the average price realisation this year is lower by Rs 44.19 per kg. Only about 9 per cent tea has fetched above Rs 300 per kg and about 51 per cent tea has sold below Rs 200 per kg," Jallan told the media.

"The production of 2020 was an aberration due to the COVID-induced lockdown. In 2019, from January to June, tea production was 220.11 million kg whereas this year it is 179.32 million kg" said Kamal Jalan, Vice Chairman, NETA.

The Green leaf cess exemption for three years from January 1, 2019 has also been helpful for the tea industry.

But unless there is a rise in the price of tea, the industry, including the small tea growers, would have to struggle for survival, they said.

Assam has more than 10 lakh tea workers in the organised sector, working in about 850 big estates. Besides, there are lakhs of small tea gardens owned by individuals.