Supertech moves SC to save twin 40-storey towers from being razed in entirety; suggests plan 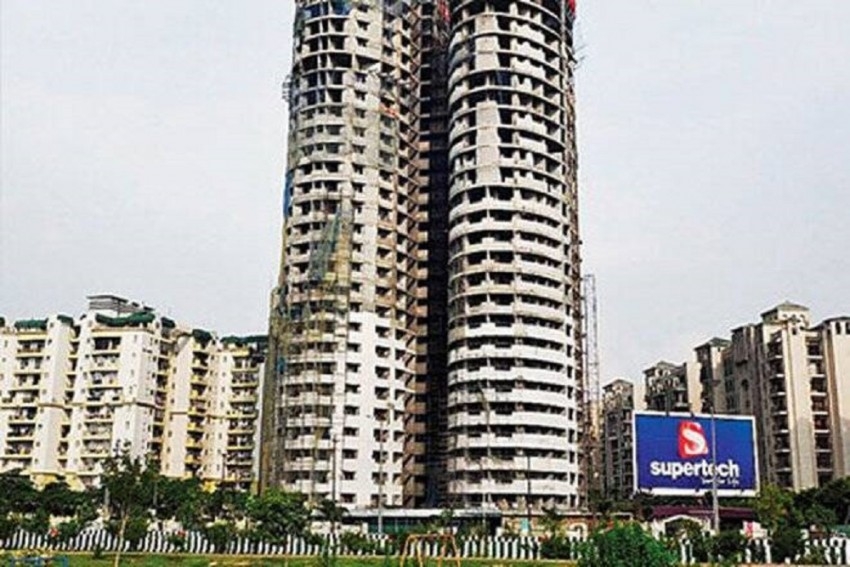 Supertech sought modification of directions given on August 31 by the top court in its verdict for part demolition of Tower-17 and a status quo with respect to twin towers at Emerald Court project in sector 93A of Noida, Uttar Pradesh, till final orders are passed on its application/ Representational image | PTI Photo

Supertech Ltd has moved the Supreme Court seeking modification in its direction to raze the realty firm's twin 40-storey towers in Noida, saying it would partially demolish 224 flats of one tower along with its community area on the ground floor to conform with the building norms.

Due to the proximity of Tower-17 (Ceyane) with the other residential towers, it cannot demolish the building by blowing through explosives and it would have to be done brick by brick, Supertech said.

"The underlying basis of the proposed modifications is that if the same are allowed, it would save crores of resources from going to waste in as much as the applicant has already put materials worth crores of rupees in the construction of the Towers T-16 (Apex) and T-17 (Ceyane)," it said.

The firm said it was not seeking review of August 31 order.

It said the construction of the towers has consumed steel and cement in huge quantities apart from various other materials including human labour amounting to several crores of rupees which shall be rendered to complete waste in the form of scrap.

"The proposed modification will also be beneficial for the environment in as much as the scrap will have no beneficial use except from disposal inasmuch as most of the debris from the demolition will have to be only dumped at landfill sites which are already overburdened. The same will add to the existing environmental issues which are already being faced by the said landfill sites thus further increasing the existing carbon footprint," it said.

The firm sought modification of directions given on August 31 by the top court in its verdict for part demolition of Tower-17 and a status quo with respect to twin towers at Emerald Court project in sector 93A of Noida, Uttar Pradesh, till final orders are passed on its application.

"The minimum distance between any part of T-1 and any part of T-17 after the partial demolition will be at least 16 metres. Tower T-16 is any case at about a distance of 43 metres from T-1," it said.

The company further said that it would provide a landscape green area on the demolished portion of T-17 which would be larger than the garden in front of T-1 originally contemplated in the 2006 sanctioned plan.

"The flat owners who opted to keep their apartments will be allotted apartments in the revised building T-17," it said, adding that the finding rendered by the top court qua compliance of fire safety norms; violations of Noida Building Regulations-2006, 2010 and National Building Code, 2005 will stand complied with.

Supertech said it has approached both architects and structural engineers who have suggested that a part of the T-17 towers which falls in front of T-1 (224 flats and the community area at the ground floor) can be demolished in a manner which will achieve the minimum of 16 metres and maximum of 40 metres between T-1 and T-17.

"It is submitted that the proposed modification if allowed shall have the effect of complying with not only the statutory scheme but also the findings of this court. In these circumstances, it would be most equitable and just to protect such part of the buildings which do not violate the building norms," it said, adding that if a part of illegality can be severed so as to protect and preserve the legal part, the same would be allowed in order balance all the competing equities.

The company said that proposed modification shall cater to the requirements of the residents of T-1 as well as the Residents Welfare Association (RWA) inasmuch as the same will allow a larger landscape area in the plot part from complying the legal requirements of maintaining a minimum distance of 16 metres distance between the two towers at all the points.

On August 31, the top court had ordered the demolition of Supertech Ltd's twin 40-storey towers under construction within three months for violation of building norms in "collusion" with NOIDA officials, holding that illegal construction has to be dealt with strictly to ensure compliance with the rule of law.

The Noida authority had received a rap on its knuckles as the top court pointed out multiple incidents of collusion of its officials with the Supertech Ltd in the Emerald Court project and violations of norms by the realty major in construction of the twin towers.

The top court had directed that the entire amount of home buyers be refunded with 12 per cent interest from the time of the booking and the RWA of Emerald Court project be paid Rs 2 crore for the harassment caused due to the construction of the twin towers, which would have blocked sunlight and fresh air to the existing residents of the housing project adjoining the national capital.

The top court noted that the two towers together have 915 apartments and 21 shops.

According to Supertech data given to the court earlier, of the 633 people who booked the flats initially, 133 have moved out to other projects, 248 have taken refunds and 252 home buyers still have bookings with the company in the project.