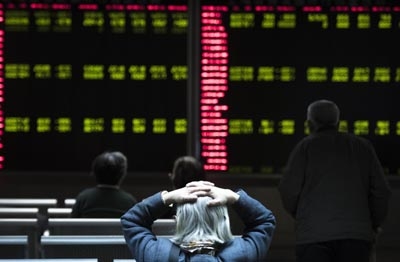 Trends on SGX Nifty indicate a negative opening for the indices with a 72 points loss. The Nifty futures were trading at 17,373.50 on the Singaporean Exchange around 07:40 AM.

Nifty fell for the fourth consecutive session falling the most in terms of points in 7 months on November 22. At close, Nifty was down 1.96 percent or 348 points at 17417. Indian markets are the worst performers in the Asian region for the day.

Jasani said, Nifty has extended the downturn, as expected, but the fact that it did not close at its low is some consolation. 17,360 and then 17,190 could be the supports for Nifty while 17613 could be a resistance in the near-term.

US stocks finish mixed on Monday

US stock benchmarks finished mixed on Monday as investors kicked off a holiday-shortened week, with the Dow industrials snapping a three-day losing streak and the Nasdaq Composite posting its biggest daily drop in almost two weeks. Equities gave up earlier gains that followed President Joe Biden’s decision to nominate Federal Reserve Chairman Jerome Powell to a second term as head of the US central bank, as widely expected.

The 10-year Treasury note yields 1.625 percent, up 9 basis points from 1.535 percent on Friday as investors continued to process higher inflation and higher rates in the COVID-19 recovery.

Biden opted for the continuation option by appointing Powell to a second four-year term as Fed Chair yesterday. Brainard will take the vice-chair position responsible for overseeing bank regulation - vacated by Quarles ahead of schedule. The move is seen as placating both Reps and Dems as Brainard is expected to be tougher on bank regulation but ultimately Powell will remain in charge. Both confirmations are pending Congress but a rejection of either is unlikely. Powell's next term will commence in Feb 2022.

Markets perceived this as a hawkish shift, with SPX selling off into the close after grinding higher all day. Gains were led by Energy and Financials with 56 percent of the constituents closing in the green. The yield curve bear flattened again as the front end lurched higher - 2Y almost at 60 bps now and 10Y at 1.62 percent. Inflation breakevens fell on the day though and HY spreads compressed too, indicating a small change in the risk off sentiment that was prevalent last week.

China continued to step up the diplomatic pressure on Taiwan, now targeting corporates it perceives as supporting the independence cause. China's recent military achievement on the hyperglide missile launcher (at 5x the speed of sound) has also left everyone wondering how they pulled it off. On real estate debt, onshore banks are reportedly being encouraged to lend to distressed names in the sector and Kaisa will reportedly pay off its wealth management product obligations this quarter. Equity indices on the mainland were among the highest gainers on the day.

Ahead today, we have Q4 GDP data from Germany and PMI data from Europe. Sentiment is expected to have taken a hit here with the recent spike in Covid cases and the restrictions that followed. Merkel said the current wave was more intense than the prior ones and the ECB has chosen to take heart from the fact that the impact on lives and livelihood is diminishing with each passing wave.”

Elsewhere, there was some optimism for China policy easing, after the People’s Bank of China reportedly cut several phrases about policy restraint in a report.

Staying on the geopolitical front, Russian stocks tumbled amid U.S. and Europe concerns about a Russia troop buildup on Ukraine border. Russia's rouble slumped to four-month lows on Monday. Ukrainian government bond prices tumbled to their lowest in more than a year, while the Ukrainian currency slipped to seven-week lows against the dollar.

The Central Bank of Paraguay raised its monetary policy interest rate by 125 basis points to 4.0 percent on Monday, hiking the key rate for the second consecutive month in an attempt to curb inflation as the economy recovers from last year's COVID-19 lockdown.