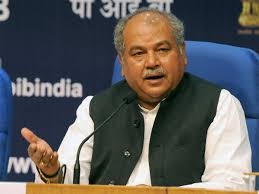 Sowing of kharif crops like paddy has picked up in almost all states with the advancement of the southwest monsoon, Agriculture Minister Narendra Singh Tomar informed Parliament on Tuesday.

Rains were in excess after its onset in the first week of June, but the monsoon slipped into a hiatus around June 19 due to unfavourable weather patterns.

"However, the monsoon has now covered the entire country. Kharif crop sowing has picked up in almost all major kharif growing states with the advancement of monsoon," he said.

The minister said the Met Department has forecast the southwest monsoon to be normal this year. And the proper distribution of rainfall is more important for normal crop production.

India receives about 70 per cent of its annual rainfall during the four-month season (June-September) that is crucial for the country's agriculture-dependent economy.

The area sown to paddy, the main kharif crop, was down 7 per cent at 207.65 lakh hectare as against 222.88 lakh hectare in the said period, as per the ministry's data.