Sitharaman says will get back money taken from banks; govt actively pursuing cases of loan defaulters 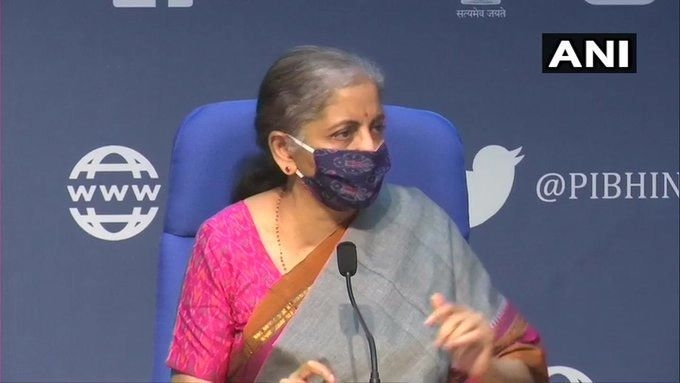 All the money taken away from the banks will be taken back as the government is actively pursuing the cases of loan defaulters, irrespective of whether they are in India or outside the country.

Nirmala Sitharaman said this on Tuesday in Jammu where she was addressing a function after launching new schemes and handing over orders to various beneficiaries under the financial inclusion and credit outreach programme here.

The central government is working in close coordination with the J&K administration to ensure that not only the Prime Minister's Development Package (PMDP) but every centrally sponsored scheme benefits every citizen of the Union territory to ensure that the region also catches up in the growth with the rest of the country, the finance minister said.

'NPAs a cause for worry'

Sitharaman said that while the government is generously putting all its resources to make J&K work well in a transparent way, ''any wrongdoing that has happened in the banks, any loans which have been taken away and not repaid till now, I am sure our system will work in such a way that the wrongdoers and the money..will be brought back.''

The finance minister said that is what has been happening in the entire country.

''The non-performing assets (NPAs) of the banks had been a cause for worry when Prime Minister Narendra Modi came to power in 2014. In order to bring down the NPAs, a specific '4Rs' strategy of recognition, resolution, recapitalisation and reforms showed immediate results,'' she said.

Sitharaman on a two-day tour in Kashmir

Sitharaman reached Jammu on the second leg of her two-day tour from Kashmir and also inspected various stalls put up by various beneficiaries of government schemes.

She said the government pursued the defaulters who took away the loans and let it become the NPA and did not pay back the taxpayers' money that is what is in the banks, whether they are in this country or gone away from India.

The government ensured that their properties are attached, and through a legal process, sold or auctioned out and that money have been paid back to the banks, she added.

The Union finance minister lauded J&K Lieutenant Governor Manoj Sinha, who was also present on the occasion, for the development of the Union Territory in a ''speedy, efficient and transparent'' manner.

She assured the people of Jammu and Kashmir that the Centre will work in close coordination with the local administration to ensure that not only the PMDP is implemented but every scheme that is launched is also brought to the Union Territory and benefits every beneficiary who deserved to be served.

''After 2019 (reorganisation of J&K), we have seen the UT of J&K go through a rapid progression. The projects that have been waiting for a long time are getting implemented and sections of the society that have never had the opportunity of receiving any assistance from the government are getting it.

''And, genuine business that has no other way of getting or accessing credit is also being provided credit,'' the finance minister said.

She said the schemes for the poorer sections that benefited the people across the country from a collective infusion of credit through farmer producer organisations or self-help groups are now seeing the light of the day in J&K.

As a result of this, the people feel they may be small but they can also access some kind of help from the government and credit from the banks, the minister added.

Seeking the cooperation of the people in facilitating outsiders to set up their units in Jammu and Kashmir, she said a lot of people want to come and set up industry here and take benefit from the industrial package of the government.

''I will invite more youth to come forward to set up their businesses in J&K. Of course, with more activities on the ground, we may attract people from everywhere else to partner with you (youth of J&K),'' she said.

Sitharaman added, ''I would certainly underline this fact that when people partner with you, they are not going to displace you or remove you but are strengthening you. You have your strengths but you need more help from resources coming from banks and elsewhere. Today banks alone cannot bring in that kind of equity for activities here,'' she said, growing activities on the ground would draw people that ultimately boost the economy of J&K.

Referring to the various initiatives of the J&K administration, she said, ''I think it is important for two-way participation — good schemes and good delivery from the government and good participation from the people — and both are all equally required.'' She said she will ensure more banking activities take place in J&K and credit help to the people in setting their businesses.

''Regarding budgetary support. I had a lot of discussion with the lieutenant governor and I shall like the chief secretary to meet officials in the finance ministry to work out any proposal for the next budget which we will definitely do,'' she said.

She also talked about the reforms in the taxation regime and said a new post of principal commissioner for income tax is being created as ''we are able to serve the people of J&K better''.