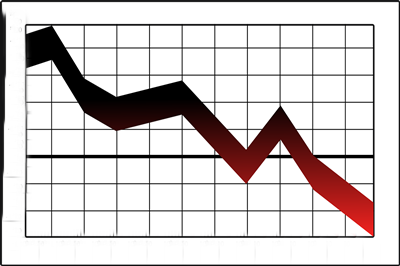 Mumbai: The benchmark BSE Sensex was down by 99 points in early trade today on sustained capital outflows amid a weak trend in global markets.

The 30-share index dropped 98.89 points or 0.38 per cent at 25,431.22 with metal, consumer durables, healthcare, PSU, capital goods and banking sector stocks, leading the slide. The gauge had cumulatively lost 639.30 points in the last four sessions.

Brokers said sentiment took a hit on sustained foreign fund outflows and a weak trend in other Asian markets, tracking overnight losses in the US after oil sank to a seven-year low as OPEC decided not to slash output.

Besides, absence of positive cues too had negative impact, they added. Among other Asian markets, Hong Kong’s Hang Seng was down 1.89 per cent, while Japan’s Nikkei shed 1.03 per cent in today. Shanghai Composite index dropped 1.33 per cent.

The US Dow Jones Industrial Average ended 0.66 per cent lower in yesterday’s trade.