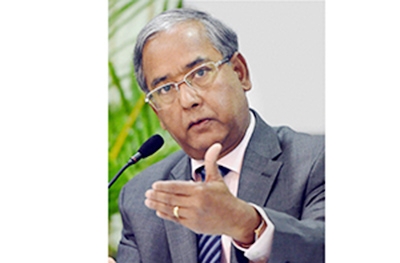 New Delhi: File photo of UK Sinha, Chairman of Securities and Exchange Board of India (SEBI) who told PTI on Wednesday about SEBI's crack down on tax evaders. PTI Photo (PTI7_22_2015_000224B) |

While more than 900 entities have been banned from capital markets by the watchdog, it has also referred these cases to the Tax Department for further probe

Mumbai : Suspecting tax evasion of at least Rs 5,000-6,000 crore, regulator Sebi has clamped down on a large number of organised syndicates who had set up ‘shops’ to convert black money into legitimate-looking funds through the stock market platform.

While more than 900 entities have been banned from capital markets by the Securities and Exchange Board of India (Sebi), it has also referred these cases to the Income Tax Department for further investigations.

“We have banned more than 900 entities and my guess is that the tax avoidance that has happened in these cases is more than Rs 5000-6,000 crore,” Sebi Chairman U K Sinha said. “We have given all the details to the CBDT (Central Board of Direct Taxes) and we have told them that they should probe them,” Sinha told PTI in an interview here.

Talking about the menace of money laundering and other market-related manipulations, Sinha said the regulator is trying to curb such cases one-by-one very successfully.

“As far as markets are concerned, one by one we are trying to curb the manipulation very successfully — be it IPO markets, GDR markets or secondary markets. But I must also say that this is an ongoing battle and I cannot say that we have controlled every thing,” he said.

Sinha further said similar activities were taking place in the GDR market also, where Sebi passed some orders which have now been upheld by the Supreme Court as well. “So, segment-wise, we have been able to control it — first in IPO market and then in the GDR market. Now let us come to the secondary market.

“We found that there are these companies where the price has gone up by 10-times, 20-times and even more in some cases…We found that there was no correlation in the price and the business of these companies…Then we realised that there was a racket going on. The same set of people were at play at all the levels and their intention was not just to manipulate the market, but their intention was actually to make the black money white,” he added.

Many startups plan to list; final norms being notified: Sinha

Mumbai : Bullish on a vibrant startup ecosystem in India, regulator Sebi  said many new-age companies have initiated plans to get listed and the final rules for their listing would be notified within 7-10 days.  Promising an easier set of compliance requirements and other regulations for startups to get listed on a new platform, Sebi Chairman U K Sinha said such firms might lack a profitability track-record, but many of them have huge potential to become highly profitable.