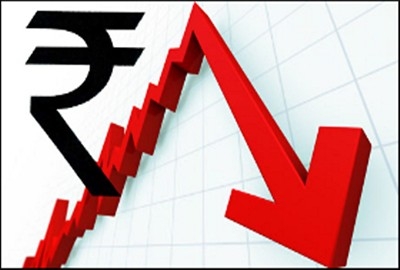 At the interbank foreign exchange, the rupee opened at 74.23 against the dollar, then fell further to 74.27, registering a fall of 3 paise over its previous close amid muted domestic equities. |

The rupee snapped its four-session winning run to close 8 paise lower at 73.08 against the US dollar on Wednesday as muted domestic equities and a strengthening greenback overseas weighed on the market sentiment.

At the interbank forex market, the local unit opened at 73.05 against the American currency and witnessed an intra-day high of 72.92 and a low of 73.50.

It finally ended at 73.08, registering a fall of 8 paise over its previous closing. On Tuesday, the rupee had settled at 73.00 against the American currency.

Anindya Banerjee, DVP, Currency Derivatives & Interest Rate Derivatives at Kotak Securities Ltd., said, "Thanks to a suspected intervention from RBI, the rupee managed to close above the 73.00 level at 73.08 on spot against the dollar. Exporter selling and corporate dollar inflows continue to cap the upside. Over the near-term, the market will test the resolve of RBI below 73.00 levels. Over the past year, RBI has been an active buyer of dollars below 73.00. If they once again show that kind of resolve, then we may see USDINR slip into a range of 72.75 and 73.75/74 over the near term."

"Rupee pulled back from two-and-a-half-month high on back of short covering along with weaker Asian currencies. Rebound in dollar index also weighed on rupee along with dollar buying around 73 odd levels," said Dilip Parmar, Research Analyst, HDFC Securities.

Medium-term bias for rupee remains on bullish side while near-term bargain buying or profit booking can’t be ruled out after surging 1.7 per cent in just four trading sessions, Parmar said, adding that Spot USD-INR is having resistance at 73.65 and support at 72.75.

Meanwhile, the dollar index, which gauges the greenback's strength against a basket of six currencies, was trading 0.03 per cent higher at 92.65.

Foreign institutional investors were net buyers in the capital market on Tuesday as they purchased shares worth Rs 3,881.16 crore, as per exchange data.

Meanwhile, India''s economic growth surged by a record 20.1 per cent in the April-June quarter of this fiscal, helped by a low base of the year-ago period, despite a devastating second wave of COVID-19.