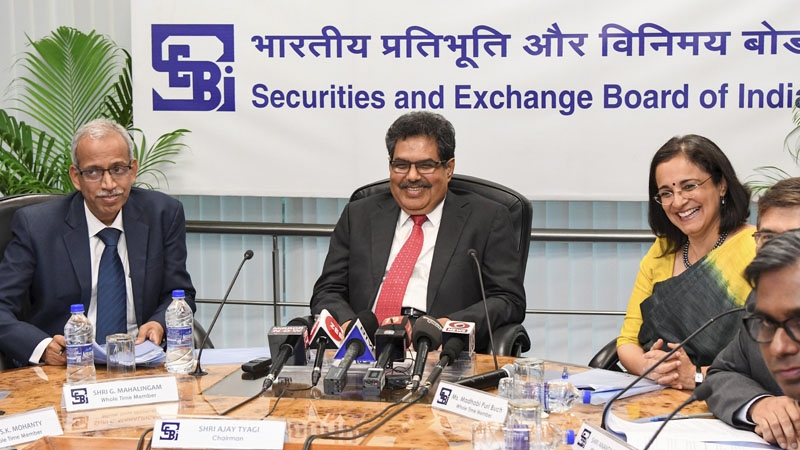 Mumbai : In a significant move, Sebi on Tuesday said it would soon come out with revised KYC norms for foreign investors and also allow overseas entities to trade in the commodity derivatives market.

Besides, Sebi’s board, during its meeting here, has cleared a proposal to introduce a common application form for foreign investors to enter into the domestic capital market. The move expected to improve ease of doing business. Tyagi said that the proposed Know Your Client (KYC) requirements and eligibility conditions for Foreign Portfolio Investors (FPIs) were discussed by the board. The discussions came against the backdrop of the circular issued on April 10, 2018 and the recommendations of the Working Group headed by former RBI Deputy Governor H R Khan. “The proposed draft circular and proposed amendments in Sebi (FPI) Regulations, 2014 were discussed by the board and broadly agreed upon. The revised circular, in this regard, will be soon issued separately,” he added.

The panel headed by Khan has suggested allowing NRIs, OCIs (Overseas Citizens of India) and RIs (Resident Indians) to be allowed to hold non-controlling stake in FPIs and no restriction should be imposed on them to manage non-investing FPIs or Sebi-registered offshore funds, as also in case of registered investment managers.

According to the recommendation, if single and aggregate NRI/OCI/RI holding is below 25 per cent and 50 per cent, respectively, of the assets under management in the FPI, then such persons may be allowed to be constituents of the FPI.

The panel has also suggested that erstwhile PIOs (Persons of Indian Origin) should not be subjected to any restrictions, while it has recommended allowing clubbing of investment limits for well-regulated and publicly held FPIs (foreign portfolio investors) having common control.

Changes have also been suggested regarding identification of senior managing official of FPIs and for beneficial owners of listed entities, as also regarding disclosure of personal information.

Besides, the panel has suggested giving six months to FPIs for compliance to new rules, after they are finalised, while the non-compliant investors can be given further 180 days to wind down their existing positions.

Sebi had issued a circular in April, proposing the new norms on KYC and beneficial owner identification, the deadline for which was extended later by two months till December. The proposed move was aimed at checking any possible re-routing of funds of Indians and NRIs through overseas locations such as Mauritius, Singapore and Dubai.

However, several FPIs had expressed concerns over the proposed changes in rules and a lobby group named AMRI (Asset Management Roundtable of India) recently said the immediate impact of the new norms, if not amended, would be that $75-billion investment managed by OCIs, PIOs and NRIs will be disqualified from investing into India, and the funds will have to be withdrawn and liquidated within a short time-frame.

Sebi, however, had said it is “preposterous and highly irresponsible” to claim that $75 billion will move out of India because of the move.

With regard to regulatory framework for permitting foreign entities, having actual exposure to Indian commodity markets, to participate in the domestic commodity derivatives markets, Sebi said that such entities would be classified as “Eligible Foreign Entities” (EFEs).

“The tenor of the hedge should not be greater than the tenor of underlying exposure. This may be reviewed based on experience of EFE participation,” the regulator said.

MUMBAI: To boost fund raising from markets, regulator Sebi has decided to reduce the time to list shares on stock exchange after initial public offerings to three days from six days. The board of Sebi on Tuesday cleared a proposal to introduce Unified Payments Interface (UPI) as an alternative payment option for retail investors buying shares in an IPO. Further, it has approved a framework to provide promoters a say in the price offered to shareholders of companies that are planning to delist from the bourses. Sebi chief Ajay Tyagi said the compression in post-issue timelines and the consequent early listing and trading of shares would benefit both issuers as well as investors. “Issuers will have faster access to the capital raised thereby enhancing the ease of doing business and the investors will have early liquidity,” he added. With regard to UPI, the Securities and Exchange Board of India (Sebi) said that the mechanism would increase the efficiency of the existing system and curtail the need for manual intervention. UPI is an instant payment system developed by the National Payments Corporation of India (NPCI). It allows instant transfer of money between any two person’s bank accounts using a payment address which uniquely identifies a person’s bank account.

Cos to raise 25% of long-term borrowings through bonds

Mumbai: Large listed companies will soon be required to raise at least 25 per cent of their long-term borrowings through corporate bonds, with Sebi board approving a revised regulatory framework on Tuesday. The board of Sebi has cleared the framework for enhanced market borrowings by large corporates and it would come into force from April 1, 2019. Large corporates would have to raise “25 per cent of their incremental borrowings” for a particular year through the bond market, Sebi said. Under the new framework, companies, other than scheduled commercial banks, that meet certain criteria would be categorised as large corporates. Long-term borrowings are those having a maturity period of more than one year.

With respect to the new framework, the Securities and Exchange Board of India (Sebi) said that such borrowings would exclude external commercial borrowings and inter-corporate borrowings between a parent and its subsidiaries.

For the first two years — 2019-20 and 2020-21 — the entities concerned would be subject to “comply or explain” mechanism. In case of failure to raise 25 per cent of the long term borrowings through corporate bonds, then the same has to be disclosed by the large corporate to the stock exchange.

According to the regulator, the requirement of 25 per cent incremental borrowing through bond market would be tested for “contiguous block of two years” from 2021-22 onwards.

“At the end of two years block, if there is any deficiency in the requisite bond borrowing, a monetary penalty/ fine of 0.2 per cent of the shortfall shall be levied,” Sebi said.