The Centre has announced several measures to assuage supply side concerns

In the upcoming credit policy of RBI which is scheduled on 8 June 2022, we expect MPC to raise repo rate by another 25-35bps. In the current rate hike cycle we expect repo rate to increase to 5.15 percent gradually.

Further, normalisation on liquidity front (much lower currently at +Rs 3tn from its record high of +Rs 9tn seen during Sep’21), recent higher cut-off yield at auctions across all tenor, signal higher interest rate in the near term.

What has changed since last off-cycle policy held on 4 May 2022?

1) Centre intervention: The Centre has announced several measures to assuage supply side concerns. Major ones include additional excise duty on petrol and diesel, fertilizer subsidy and subsidy on gas cylinders, reduction in customs duty on few products. These measures though will provide temporary relief on the inflation front; will entail a fiscal impact of Rs 2.9 lakh crore. Fiscal deficit may slip to 6.6-6.7 percent in FY23. Thus through the fiscal channel as well, there might be a secondary impact on inflation.

2) Oil prices remain elevated: International crude prices was trading at $ 105/bbl in the last policy. However, post-that it rose by 14.1 percent to $ 120+/bbl. Even OPEC+ recent decision to increase output by 648,000/bpd/month (432,000bpd/month earlier), could not support prices. Notably, another important development has been EU countries reaching an agreement to ban most of Russian oil imports under the 6th set of sanctions on Russia. The President of European Council has confirmed that this will immediately impact 75 percent of Russian oil imports and ~90 percent imports by end of CY22.

3) Inflation still elevated: Major food items which has a prime share in CPI food basket is seen inching up in May’22 as well. Even core inflation is creating a pressure.

Table 1. Movement in prices of major items in the food basket in May’22 over Apr’22 | CEIC, Bank of Baroda Research note: Darker shade of red indicates steeper price increase 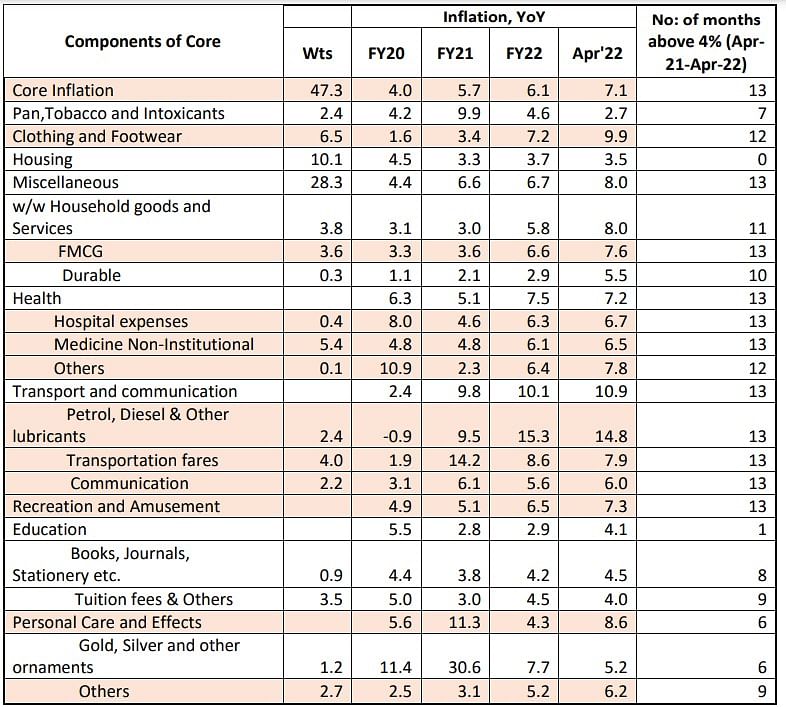 4) Market rates signal more rate hikes: The cut off yield for both short and long end yields are increasing off late, clearly signaling rising interest rate cycle. Even the recent 10Yr corporate bond spread rose from its record low in May’22. We expect 10Y bond yields to remain elevated in the range of 7.5-7.75 percent. We also expect some intervention in the form of OMO purchase announcement/operation twist by RBI. Normalisation on liquidity front is quite visible as in May’22 as it averaged at Rs 4.5tn (currently at + Rs 3tn), far below its high of above Rs 9tn seen in Sep’22. In the past whenever, liquidity withdrawal has occurred, 10Y yield has risen. 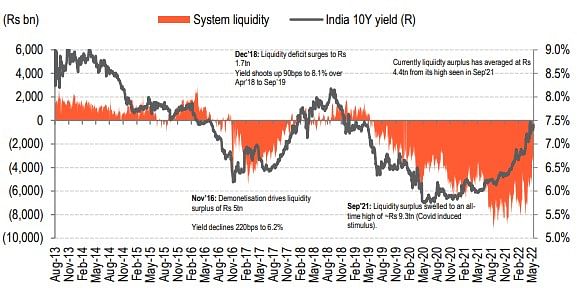 5) Domestic yields to remain elevated in line with global yields: Global central banks continued juggling between growth and inflation. San Francisco’s Fed President, Cleveland Fed President and Fed governor Waller also spoke of 50bps rate hike in the coming meetings. Even ECB official also said that a 50bps rate hike cannot be ruled out in Jul’22. Further, record high inflation print in the UK, Eurozone and above 8% in the US, would prompt central banks to remain hawkish in the future as well. Thus, in line with global yields, domestic 10Y yield will increase.

Fig: 3 Global yields inched up so has India’s, albeit, by 17bps since the last policy | Source: Bloomberg, Bank of Baroda Research

Where our forecast stands?

State of credit and deposits: Credit demand is increasing at a sharper pace. Few of the macro indicators such as services PMI, eight core data print, rail freight, air passenger and GST collections, all signal that economy is gaining momentum. Even deposit growth is picking pace, with rising rates. 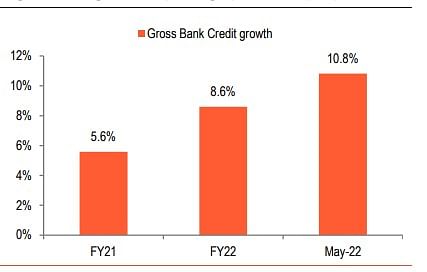