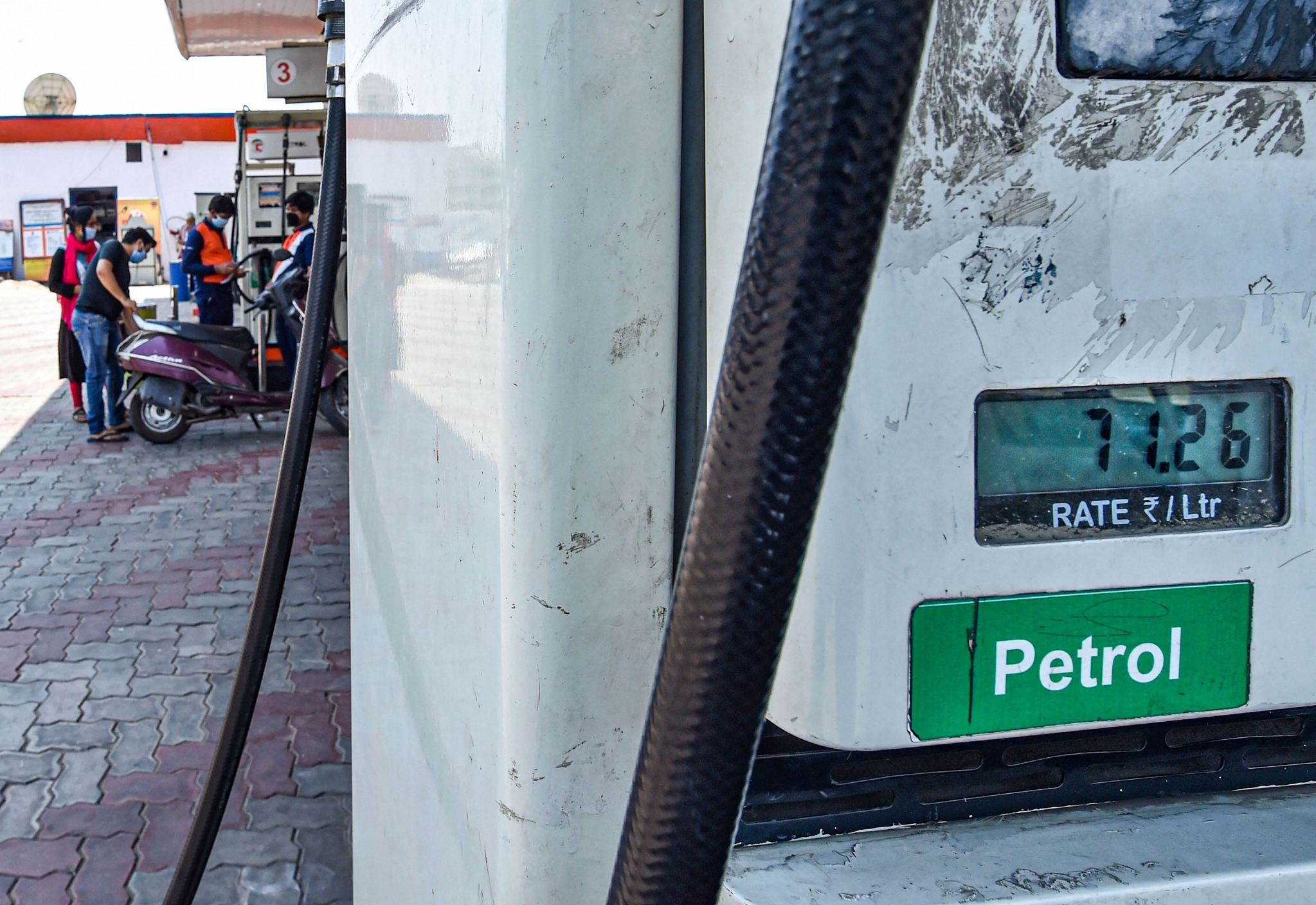 Petrol price for the third straight day hiked by 25 paise a litre and diesel by 30 paise, according to a price notification of state-owned fuel retailers / Representational image | Photo credit: PTI

Petrol price for the third straight day hiked by 25 paise a litre and diesel by 30 paise, according to a price notification of state-owned fuel retailers.

Petroleum Secretary Tarun Kapoor said oil companies are taking their own decision on aligning retail rates with the cost but they are ensuring extreme volatility is avoided.

"We are watching the situation and trying to ensure the impact of global volatility is moderated to a large extent," he said.

The basket of crude oil India buys has jumped to a near three-year high of $76.71 per barrel. International prices of petrol, against which local rates are benchmarked, have risen from $85.10 per barrel to $87.11 in just one day while diesel has gone up from $85.95 a barrel to $87.27.

This sudden spike in international oil prices follows global output disruptions but the entire increase in retail rates necessitated by such an increase is not being effected, another official with direct knowledge of the matter said.

"Just look at LPG rates. They have gone up from $665 to $797 in one month but oil companies haven't passed on the increase warranted from that," he said adding state-owned companies were absorbing a lot of volatility.

The increases, he said, have been "mild to moderate".

"Some people are making a big deal out of the 62 per cent hike in natural gas prices. But if you look at the rates previously at $1.79 per million British thermal unit were abnormally low and way below cost. They have now gone up to $2.9. They still are less than the cost of production of $3.5 per mmBtu and are certainly lower than the $4.2 price that was prevalent in India a decade back," the official said.

Naturally, the hike in natural gas price will warrant an increase in CNG price but the increase is again being moderated there too, he said adding internationally the price of LNG in the spot market last week soared to an unprecedented $35.

"Compare to what is happening worldwide, we have managed the situation well," the official said. "Some of the developed nations such as the UK have seen petrol pumps go dry but you won't have heard of such a situation anywhere in India. Our oil companies are not just moderating retail prices but also ensuring uninterrupted supplies." Officials said India believes the situation internationally is temporary and abnormal and things should stabilise over the next few days and weeks.

The fifth increase in its rates in less than a week's time has sent petrol prices above Rs 100 in most major cities of the country.

Similarly, the eighth increase in prices in 10 days has shot up diesel rates above Rs 100 mark in several cities in Madhya Pradesh, Rajasthan, Odisha, Andhra Pradesh and Telangana.

In eight price increases since September 24, diesel rates have gone up by 2.15 paise per litre. Petrol price has increased by Rs 1.25 per litre in five instalments this week.

When international oil rates fell in July and August, retail prices of petrol and diesel in the Delhi market were reduced by Rs 0.65 and Rs 1.25 per litre.