Nuclear deadlock: Iran currency drops to lowest value ever amid US sanctions

Iran's currency Sunday dropped to its lowest value ever as talks to revive the country's tattered nuclear deal with world powers remained deadlocked.

Iran's currency was trading at 32,000 rials to the dollar at the time of Tehran's 2015 nuclear deal with world powers.

The rial's new low came as U.S. sanctions against the country are still in force. Iran's economy is struggling mightily mostly because of the U.S. pullout from the 2015 nuclear deal between Iran and world powers that restored sanctions on Iran's oil and banking sectors.

Talks in Vienna to renew the agreement have been deadlocked for months.

Hossein Zolanvari told the official IRNA news agency that his company sold the Boeing to a Venezuelan company about a year ago.

"Mentioning Mahan Air in connection with the impounded airplane has aimed at political purposes," he said.

He said the plane's crew also have no connection to Mahan Air.

It wasn't clear if the plane was on a list of Iranian aircraft subject to U.S. sanctions.

Venezuelan leader Nicolas Maduro visited Iran over the weekend. Both nations are under the U.S. sanctions. 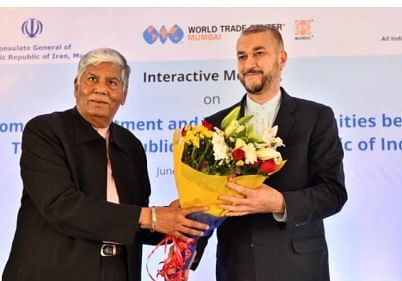 HomeBusinessNuclear deadlock: Iran currency drops to lowest value ever amid US sanctions