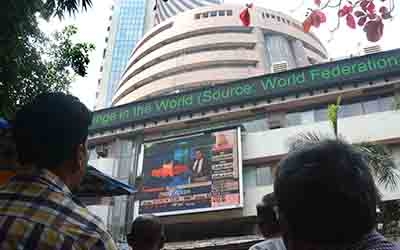 In a very volatile start at the markets, both the indices – Sensex and Nifty - were oscillating frequently between the green and red.

Tech Mahindra was the top gainer in the Sensex pack, rising over 8 per cent, followed by HCL Tech, Power Grid, HDFC, Dr Reddy and M&M.

Tech Mahindra on Thursday reported a 42.91 per cent growth in June quarter consolidated net profit at Rs 1,365.7 crore on higher revenue and an expansion in profit margins.

CS and HDFC Bank gained up to 0.45 per cent in early deals.

On the other hand, Bajaj Finserv, SBI, Bharti Airtel and Asian Paints were among the laggards.

Foreign institutional investors (FIIs) were net sellers in the capital market as they offloaded shares worth Rs 866.26 crore on Thursday, as per provisional exchange data.

Asian shares slipped on Friday, with a gauge of regional equities set for its biggest monthly drop since the height of global pandemic lockdowns last March. Markets in Asia-Pacific were mostly lower in early trading on Friday. Meanwhile, US stocks rallied despite data showing second-quarter GDP grew less than expected. Japan's Nikkei 225 dipped 1.2 percent in early trade, while the Topix lost 0.81 percent.

Amazon became the latest mega-cap technology company to post disappointing guidance (post US market close), with a pandemic-fueled surge in e-commerce set to fade and drag on revenue growth. The company said it sees current-quarter net sales coming in at as much as $112 billion, missing estimates for $118.7 billion. Shares fell more than 7 percentin late trading.