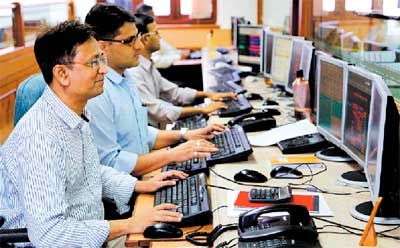 The benchmark indices opened positively and held the gains throughout the day. The Indian benchmarks continued their positive momentum today also with Nifty closing up +1.1 percent and Sensex closing up +1.09 percent on December 22. All the sectoral indices ended positive ed by Nifty Realty, Pharma, and PSU Bank. The BSE midcap and smallcap indices were over 1 percent each.

Sachin Gupta, AVP-Research, Choice Broking said, "On the technical chart, the Nifty has settled above the prior day Doji Candlestick, which suggests a decisive movement in the index. Moreover, the price has also moved above the 9 & 21 hour SMA on the hourly chart and also confirmed a breakout of Bullish Harami candlestick on a four hourly chart. In addition, the stochastic has witnessed a positive crossover on the daily time-frame. At present, the Index has support at 16,750 levels while immediate hurdle at around 17,000 levels, crossing above the same can show 17,200-17,300 levels, which may act as resistance zone. On the other hand, Bank Nifty has support at 34,600 levels while resistance at 35,500 levels."

Strong buying was seen in auto, metal and realty stocks. The upward momentum in Indian indices got support from positive rebound in global markets.

Mohit Nigam, Head - PMS, Hem Securities, said, "Overall markets seem to be once again in positive momentum but we advise investors to remain in a cautious mode and accumulate quality stocks in dips with good growth visibility. On the technical front, 16,500 and 17,200 are immediate support and resistance for Nifty 50. For Nifty Bank, 34,600 and 35,500 might act as immediate support and resistance respectively."

Nifty is expected to trade with a positive bias for the near term; resistance is expected at 17,400-17,500 levels, said Sahaj Agrawal, Head of Research- Derivatives at Kotak Securities. "Overall consolidation is expected to continue for some weeks before markets witness a directional move. We remain selectively positive with preference to frontline stocks over the midcap space. IT and Banking are expected to participate while FMCG is expected to underperform in the near-term".

Nagaraj Shetti, Technical Research Analyst, HDFC Securities, said, "The pullback rally continued in the market and the Nifty is now entering a crucial overhead resistance of around 17,000-17,200-levels. There is a higher chances that Nifty could reverse down from near this area in the next few sessions. Immediate support is placed at 16,830-levels."

Shrikant Chouhan, Head of Equity Research (Retail), Kotak Securities Ltd, said Bulls were in a strong position throughout the session as the stock markets moved in tandem with the recovery in other global equity indices. "Investors are covering their shorts as the market has been in an oversold position due lingering external worries. After a strong opening, the Nifty took intraday support at 16,820 and reversed sharply. The index has maintained a higher bottom formation, which suggests the uptrend wave is likely to continue in the near future. We are of the view that the support has shifted to 16,800 from 16,700 and as long as the index trading above the same the positive momentum will continue up to 17,020-17,100 levels. On the flip side, dismissal of 16,800 could trigger further weakness till 16,720-16,675."

Technically, Nifty held above its biggest support line and December 21's low at 16,688 mark, said Prashant Tapse, Vice President (Research) at Mehta Equities Ltd, said. "The bulls will now anxiously await a solid recovery in the global equity markets that could act as a tailwind for the benchmark Nifty in tomorrow’s trade. Technically, all aggressive bullish eyes will be on Nifty’s biggest interweek hurdles at 17,169-17,389 zone, and above the same it will be again all roses for our stock markets. Alternatively, expect a waterfall of selling below Nifty 16,633 mark with aggressive downside risk at 15,907-mark".