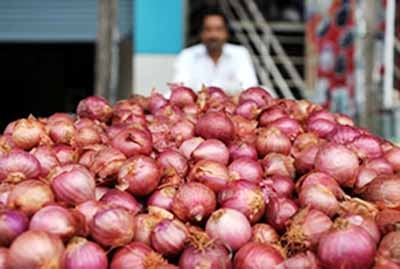 New Delhi: With wholesale prices down to the Rs 10 per kg level, the Maharashtra government has asked the Centre to scrap the minimum export price (MEP) for onions to help boost overseas shipments. In August, the government had hiked onion MEP to USD 700 per tonne, from USD 425, as prices at both wholesale and retail levels were skyrocketing on lower output due to unseasonal rains earlier.

MEP is the rate below which no exports are allowed. The rise in MEP restricts exports and improves domestic supply. “In a letter written to the Union Agriculture Ministry, the Maharashtra government has demanded removal of onion MEP to encourage exports, which would protect interest of farmers,” a senior Agriculture Ministry official said.

India exported 4,59,097 tonnes of onions during May-August this year. The overseas sale did not take place from September onwards after increase in the MEP to USD 700 a tonne, the official said. Wholesale prices are falling as arrivals have risen all of a sudden from November 15, though area sown for 2015 kharif onion is down and output is also estimated to be slightly lower than last year’s, the Nasik-based body NHRDF said.

According to the data maintained by the National Horticultural Research and Development Foundation (NHRDF), wholesale onion prices are ruling at Rs 10-14 per kg at Lasalgaon in Maharashtra, Asia’s biggest wholesale market for onion, much lower than its peak Rs 57 per kg in August. Asked if onion farmers are incurring losses due to fall in prices, NHRDF Director R P Gupta said, “Farmers are still getting the price slightly higher than the cost of production of Rs 8-9 per kg. But their profit margin has come down sharply compared with previous months.”

When wholesale onion prices had gone beyond Rs 50 per kg, farmers’ profit was four times higher than the cost of production. Now, they are getting a reasonable profit of Rs 4-5 per kg, he added.

Normally, kharif onion crop arrival starts from October through December. However, this time, harvesting got delayed due to late sowing of kharif onions and now, arrivals are in full swing in major growing states — Maharashtra, Gujarat, Madhya Pradesh and Rajasthan.