Jaitley says absolutely clear that Indian economy is on a recovery 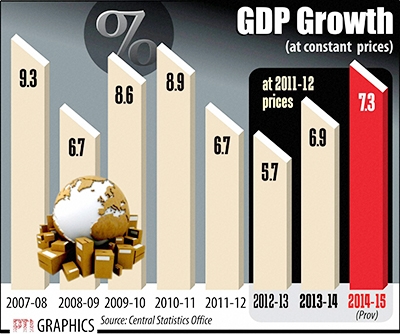 Rebuts Manmohan Singh’s view that economic recovery was fragile; adds that manufacturing sector is the silver lining in GDP data which grew at 7.1%

New Delhi : Dismissing former Prime Minister Manmohan Singh’s comments on the state of Indian economy, Finance Minister Arun Jaitley said an economy growing at fastest pace in the world cannot be ‘fragile’. “In a global slowdown situation, to have the fastest growth rate in the world certainly does not make Indian economy fragile,” he told reporters.

Jaitley made these comments when asked about the Singh’s statement that recovery in the Indian economy was very fragile. The Finance Minister said the fourth quarter (January- March) GDP growth of 7.5 per cent and 7.3 per cent for the entire financial year 2014-15 indicate that the economy is in “recovery mode”.

The silver lining in the GDP number is the manufacturing sector which registered 8.4 per cent growth in the fourth quarter and 7.1 per cent for entire 2014-15. “Manufacturing and services indicate that we have a potential to grow at 8-9 per cent and beyond,” Jaitley said.

The fourth quarter GDP data “gives us a broad idea of how the Indian economy is moving. It is absolutely clear that the economy is in a recovery mode”, he added.

While the fourth quarter GDP growth rate at 7.5 per cent was better than China’s 7.4 per cent, making India the fastest growing economy in the world, for the full fiscal it was a tad lower than the Chinese growth rate. Jaitley further said that with improvement in agriculture and exports, India could achieve 9 per cent growth rate.

Jaitley said the services sector is moving towards a double digit growth rate while there is an upward movement in the manufacturing sector. “Therefore, it holds a good promise for Make in India programme”.

There is some improvement in capital formation and revenue collections, he said, adding they indicate that the Indian economy has a potential to realise its own strength.

He blamed poor monsoon for lower agriculture growth rate of 0.2 per cent in 2014-15.

Commenting on the GDP numbers, Finance Secretary Rajiv Mehrishi said the improvement in manufacturing sector growth shows that jobs are being created.

Chief Economic Advisor Arvind Subramanian said manufacturing and the services sector, which are within the government’s control, have done well; while those beyond its control – farm and exports, linked to monsoon and global economy respectively, have not done so well. Subramanian said the positive impact of last year’s slump in global oil prices will be fully realised in 2015-16.

Industry body Ficci, said that some downside risks continue to pervade. “Agriculture output may be impacted with a sub-normal monsoon forecast this year, weak demand remains a persisting concern and a firm turnaround in the domestic capex cycle is awaited,” it said.

Assocham too said that the policy makers need to continue with the proactive stance.   The government needs to keep on pushing more ground-level reforms and improve implementation so as to realise the economy’s true potential, the chamber said.  “The need is for creating an investment and industry friendly environment that is largely focused on growth, job creation, poverty alleviation and passing the benefits of the economic growth to the lowest sections of the economy,” Assocham added.