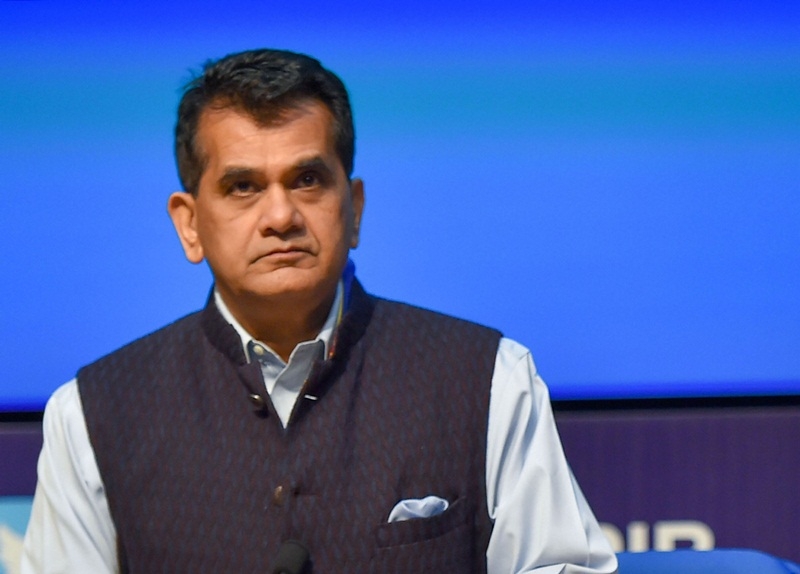 Kant also expressed concern about the state of nutrition among children as he pointed out that it is happening because of a lack of ''convergence'' between various departments. | (PTI Photo/ Kamal Kishore)

NITI Aayog Chief Executive Officer Amitabh Kant on Thursday said investment in social sectors like health and education is crucial for sustained economic expansion and maintained India must get into ''sunrise areas of growth''.

Kant also expressed concern about the state of nutrition among children as he pointed out that it is happening because of lack of ''convergence'' between various departments.

''Investment in health, education, nutrition and skill development is just as necessary, if not more important, than economic reforms. Along with investment in physical and digital infrastructure, also focus on these sectors because it is necessary for a sustained economic growth over a long period of time,'' he said.

He was speaking at the Indian Institute of Management Ahmedabad (IIMA) here on the topic ''India 2031: The decade of transformation''. ''For a sustained growth, India needs to improve its learning outcomes. India needs to get its health outcomes right and improve nutrition outcomes. We must get social indicators right. Much of this lies in the domains of state governments,'' the former bureaucrat said.

He added that South Korea was able to economically grow at such an impressive pace mainly because of its human capital, which was much better in terms of health, education, level of schooling and social security.

''Its not possible for India to grow without improving learning outcomes, health outcomes and focussing on nutrition. This is the key to grow with equity. If you do well in these social indicators, you will do well in the long run and sustain your growth over a three decade period,'' Kant said.

Expressing concern about shortage of infrastructure, manpower and financing in the health sector, the NITI Aayog CEO informed that India's average is 0.5 beds per 1,000 persons as against China's 4.3 beds and South Korea 12.4 beds.

''The challenge in the nutrition sector is that anemia and stunting is widespread. Its simply because at the grassroots level we could not converge our education, health and woman and child development schemes together,'' said Kant, adding states can play a key role in improving social indicators.

He suggested India must get into ''sunrise areas of growth'' such as electric mobility, battery storage, artificial intelligence and machine learning using data.

''Also, India should focus on using renewable energy to produce green hydrogen and become a champion in producing green hydrogen and green amonia. This will help us in cutting down fossil fuel imports, which now stands at $160 billion and it may go up to $320 billion in the next decade,'' Kant said.

''India should also focus on planned, scientific urbanisation for a sustained growth. Because in coming five decades, India will see 500 million people getting into the process of urbanisation. This means we have to create one-and-a-half Americas in the next five decades,'' the retired IAS officer added.