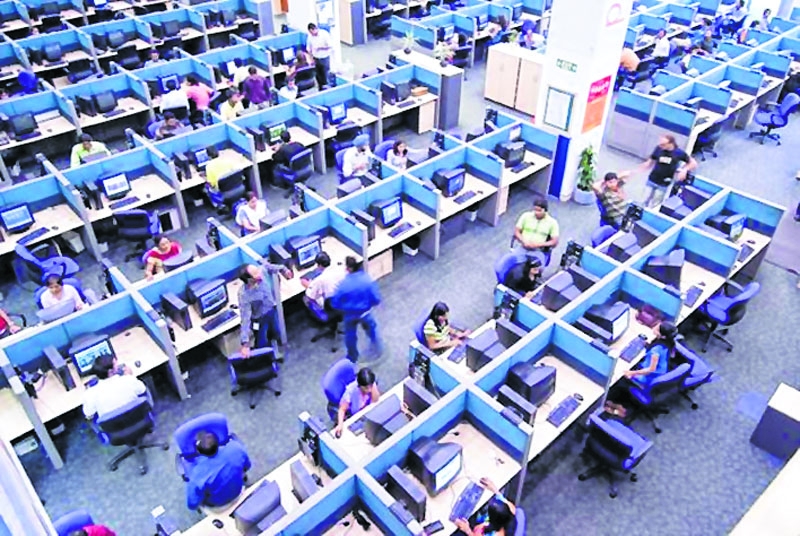 Bengaluru : The resilient Indian IT industry, which has been going through challenging times on multiple fronts, faced disruption in 2017 from increasing automation and the boardroom spat in software major Infosys spilling into the public domain.

Though the $150-billion (almost Rs 10 trillion) software sector reconciled to single digit export growth of 7-8 per cent for the 2017-18 fiscal, demand for more automation and using Artificial Intelligence (AI) in the services had put the vendors under pressure to hone the skills of their techies in the thousands and invest in new technologies to deliver on time for global enterprises.

Brexit and the sluggish demand in Europe also lowered the industry’s export growth from 9-10 per cent in the last fiscal (2016-17). “The lower export outlook is a result of political and economic uncertainties impacting decision-making and discretionary spend,” the National Association of Software and Services Companies (Nasscom) admitted in a statement.

Software exports contribute about 80 per cent to the industry’s revenue, with the US market generating 60 per cent of this, while the domestic market is projected to grow 10-11 per cent in 2017-18. “Modernisation of clients’ IT operations and adoption of new technologies such as SaaS (Software As A Service) applications, cloud platforms, BI (Business Intelligence), cognitive and embedded analytics for digital projects of enterprise customers have been the industry’s growth drivers in 2017,” noted Chandrashekhar.

According to Nasscom Chairman Raman Roy, the industry has reinvented and is focused on building digital solution offerings through a combination of business model changes and investment in products and platforms.

Admitting that the industry would need bold and imaginative action to resolve issues, Chandrashekhar said opportunities were unfolding, as new sectors such as healthcare, energy, transportation and manufacturing were also adopting ICT solutions to sustain, compete and grow.

Besides traditional sectors like banking, financial services and insurance (BFSI), telecom, retail, utilities, transport and logistics, a host of other verticals are investing in automation, AI, cloud computing, data analytics, machine learning, robotics and Internet of Things (IoT). “Adoption of new technologies by traditional and new sectors like healthcare, education, gaming and entertainment, e-commerce, digital, public services and internet mobile are making the IT industry invest in skilling and reskilling their talent to sustain the momentum,” asserted Chandrashekhar.

On the flip side, innovation and tech start-ups have also faced headwinds, as angel investments and initial funding have sharply declined over the months. “Though the ecosystem for start-ups is maturing and thriving on smart talent, raising funds to sustain growth and expand the market reach is challenging as their potential investors have become risk-averse due to uncertainty,” noted Chandrashekhar, a former Telecom Secretary and regulator.

Hiring in traditional services like application development, testing and maintenance will, however, continue to decline due to automation and AI. “The declining trend in hiring is secular and will continue due to automation, course correction and technology induced changes in the business models,” Chandrashekhar added.

Infosys, meanwhile, was rocked by boardroom battles that led to the dramatic exit of its first non-promoter Chief Executive, Vishal Sikka, in August and return of co-founder Nandan Nilekani as Chairman to steer it out of troubled times.

What began as an ethical issue for good governance the IT major is known for, had blown up into an open war between co-founder N.R. Narayana Murthy and its previous Board on the buyout of a US-based software firm (Panaya) and the severance pay to its former Chief Financial Officer, Rajiv Bhansal, in October 2015.

While Sikka tried to play down the issue, terming governance lapse as media speculation, a whistle-blower’s letter to the SEBI on the $200-million Panaya acquisition deal in February 2015 forced Murthy to red-flag the issue again with the Board members, including its former Chairman R. Seshasayee and Sikka. When an international law firm and a risk consultancy found no evidence of wrongdoing in acquiring Panaya, Murthy insisted on making their report public and advised the Board to be transparent in all its decisions.