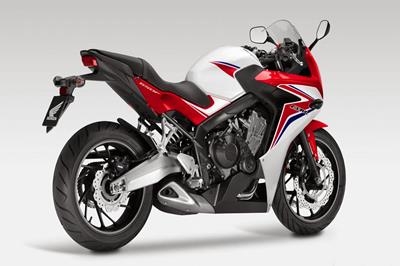 New Delhi: Honda Motorcycle & Scooter India (HMSI) today launched its sports bike CBR 650F in India, priced at Rs 7.3 lakh (ex-showroom Delhi), as part of its plans to roll out 15 products this year. The company also showcased its brand new 160cc bike CB Hornet 160R and updated versions of CBR 250R and CBR 150R models, which will make it to the market in the near future. The two-wheeler major also showcased a new ‘mystery’
motorcycle, which would be launched later this year. However, no details were shared.

“We had announced to launch 15 models this year and out of that we have already introduced 10 products so far in the past seven months. CBR 650F is the 11th model launched in the country,” HMSI President & CEO Keita Muramatsu told reporters here. The company is manufacturing the CBR 650F in India. “The team at Honda has worked very hard to realise a dream of making a 16 valve in line, four cylinder motorcycle right here in India,” Muramatsu said.

The ‘made in India’ CBR 650F opens a window of opportunity for the company, he added. HMSI Senior Vice President (Sale and Marketing), YS Guleria said the models showcased today are going to drive “the next growth curve for Honda in India”. The CBR 650 F comes with various features mono shock suspension, six speed transmission and engine cooling. The company said as part of Honda extending MotoGP association with Italian apparel maker GAS, a limited edition of GAS-Honda biking clothes and accessories would be launched in the country.

The merchandise will make debut at Honda Wing worlds for retail, it added. Earlier this year HMSI had announced to launch 15 products in 2015 while setting eyes on annual sales of 50 lakh units. HMSI sold a total of 3,89,624 units in July. In the current fiscal the company has sold over 14 lakh units, 5 per cent growth over same period last year.