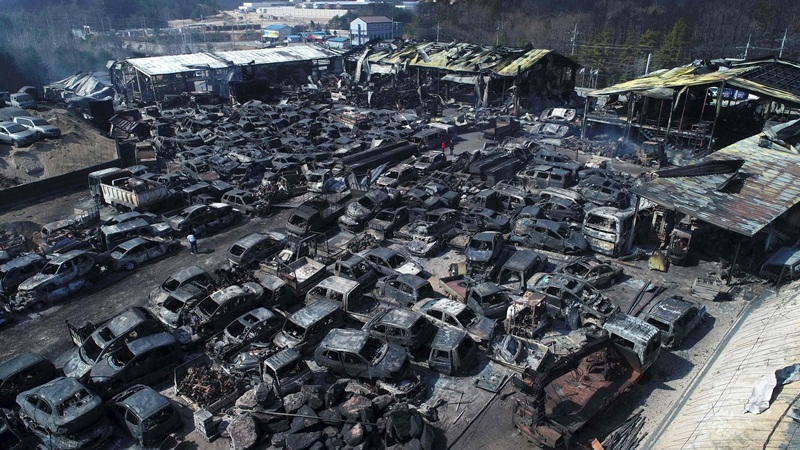 Scrapped vehicles burnt by a forest fire are seen at an auto junkyard in Sokcho on April 5, 2019. - A giant forest fire swept across swathes of South Korea on April 5, as authorities declared a rare national emergency, deploying 900 fire engines and tens of thousands of personnel to bring it under control. (Photo by YONHAP / YONHAP / AFP) / - South Korea OUT / REPUBLIC OF KOREA OUT NO ARCHIVES RESTRICTED TO SUBSCRIPTION USE |

New Delhi: Arguing that free trade agreements (FTAs) with competing countries do not benefit Indian automobile industry, SIAM has called for 28 items, including hybrid, electric cars and three-wheelers to be kept in negative list in all such pacts.

Automobile industry body Society of Indian Automobile Manufacturers (SIAM) said "it is extremely concerned about the way India is negotiating FTAs with various nations and groupings", specially with European Union (EU) which has demanded inclusion of import of completely built units to be included in the agreement.

"SIAM has consistently submitted that FTAs with competing countries do not benefit Indian automobile industry, it is against the concept of Make in India for local value addition and local employment," it said in a white paper.

In the paper titled Trade Agreements that may Jeopardize 'Make in India' Programme for Automobiles, SIAM said, "India has signed FTAs with several important partners in the last few years and has witnessed a worsening of trade balance whenever it is with a major manufacturing economy like ASEAN, South Korea, Japan."

Drawing attention to "one of the most demanding FTAs being negotiated" by India with the EU, SIAM said it "needs to be negotiated with utmost caution and after reviewing the results of all other FTAs concluded by India and taking onboard all the domestic stakeholders who might get affected due to the signing of the FTA".

"...Giving in to the EU's demand of tariff reduction in CBUs will be very detrimental to the Indian automobile industry," it said. It further said the negative fallout will seriously compromise the interests of industry's investment, manufacturing value-add and employment at no obvious gain in trade or economic expansion.

"For automobile industry, India-EU FTA will be counter to our 'Make in India' initiative," it added. SIAM said, "In our FTAs with Japan, Korea and ASEAN, we have not included automobile CBUs and there is no reason why we should include them under RCEP at this stage."

India's tariff policy and keeping CBUs in the negative list of all FTAs has helped foreign direct investment (FDI) in automotive sector since global companies wanted to avoid high tariff but at the same time could not ignore the fast-growing market in India.

"Reduction of tariff on CBUs under India-EU FTA will be a complete reversal of the policy of high tariffs to force investment, local manufacturing, local value addition and local employment," the industry body said, adding it would jeopardise the entire Automotive Mission Plan 2016-2026 targets of additional employment of 65 million persons for which an investment of Rs 4,50,000 crore to Rs 5,50,000 crore (USD 68-82 billion) would be required.

It further said bringing CBUs under EU FTA would be unfair to automobile companies who have made substantial investments in India. SIAM said its list of 28 items, including CBUs of hybrid and electric cars and three-wheelers; transport vehicles of ten or more persons and engines, should be kept in India's negative list in all FTAs.