Five years after demonetisation, cash in circulation at near peak in 2021: Report 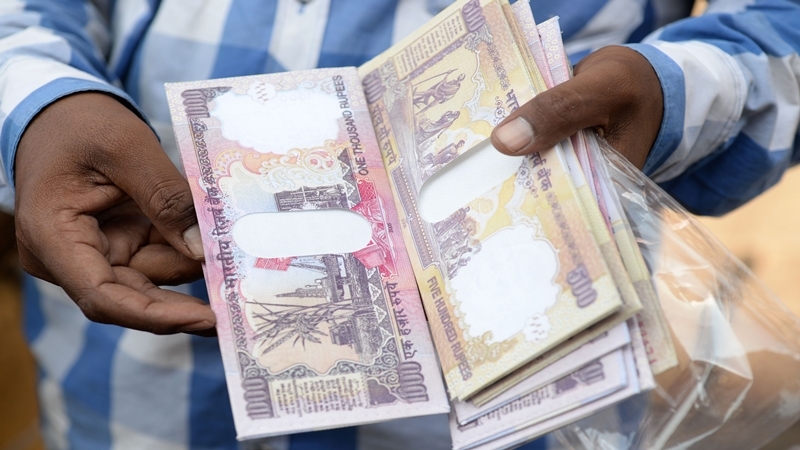 According to the report by SBI Research, almost 80 per cent of the economy has been formalised in the past five years./Representative Photo |

The key component of an informal economy -- cash in circulation (CIC) as a percentage of GDP -- has continued to rise year after year, barring in the year of note ban in 2016 when it fell to 8.7 per cent, according to a report.

According to the report by SBI Research, almost 80 per cent of the economy has been formalised in the past five years with every aspect of the non-cash component of the economy including agri credit, gaining traction.

In a detailed report on Monday, SBI Research said that after dipping to 8.7 per cent of GDP in 2016 (after the note-ban), cash in circulation (CIC) as a percentage of GDP has climbed again to 13.1 per cent so far this fiscal. It is only marginally down from the peak of 14.5 per cent in FY21, which could be because of the pandemic-driven sense of insecurity and uncertainties.

During FY08-FY10, when the economy was on a scorching growth rate, sniffing at almost double-digits growth, the CIC trended at 12.1, 12.5 and 12.4 per cent, respectively. The same trend continued with minor variations in the next five years also peaking at 12.4 per cent in FY11 and falling to 11.4 per cent in FY15, according to the SBI report pencilled by Soumya Kanti Ghosh, its group chief economic adviser.

Ghosh attributes the high 14.5 per cent CIC in FY21 to the collapse of the economy due to the pandemic, wherein the GDP reported the worst contraction of 7.3 per cent.

If the circumstances were normal, nominal GDP growth in FY21 and FY22 would have been much higher and as a result, CIC would also have followed the trend as witnessed pre-note ban.

According to him, without the pandemic-induced GDP collapse, the CIC-GDP ratio would have been at 12.7 per cent as against 12.4 per cent in FY11 as because of the pandemic, people might have held as much as Rs 3.3 lakh crore in cash as a precaution.

It added that the credit card spends are on course to set a record this year as already YTD (year-to-date), it has reached Rs 13,300 crore, according to the report.

Ghosh also noted that tax as percentage of GDP has also jumped since FY16 but declined after FY19, reflecting the changes in the Budget of 2019. The tax-GDP ratio has jumped in the pandemic year again reflecting formalisation efforts.

The tax-GDP ratio jumped from 10.5 per cent in FY16 to 11 per cent in FY19 but retreated since then, as the exemption limit was raised to Rs 5 lakh in the Budget FY20.

On the macrofront, the economy formalised much larger: The share of the informal sector GVA to total GVA for FY18 stood at 52.4 per cent. Employing this methodology (except for agricultrue and allied activities), the informal economy is possibly only around 15-20 per cent of the formal GDP, according to the report.

Even agriculture formalised if the numbers of Kisan Credit Cards (KCCs) are any indication. In the past three-four years, the per-card outstanding has increased from Rs 96,578 in FY18 to Rs 1,67,416 in FY22, an increase of Rs 70,838, that translates into agri credit formalisation at Rs 4.6 lakh crore and there are 6.5 crore KCCs.

According to the GST portal, between August 2018 and March 2021, the number of new MSMEs (micro, small and medium enterprises) incorporated stood at 499.4 lakh and came under GST.