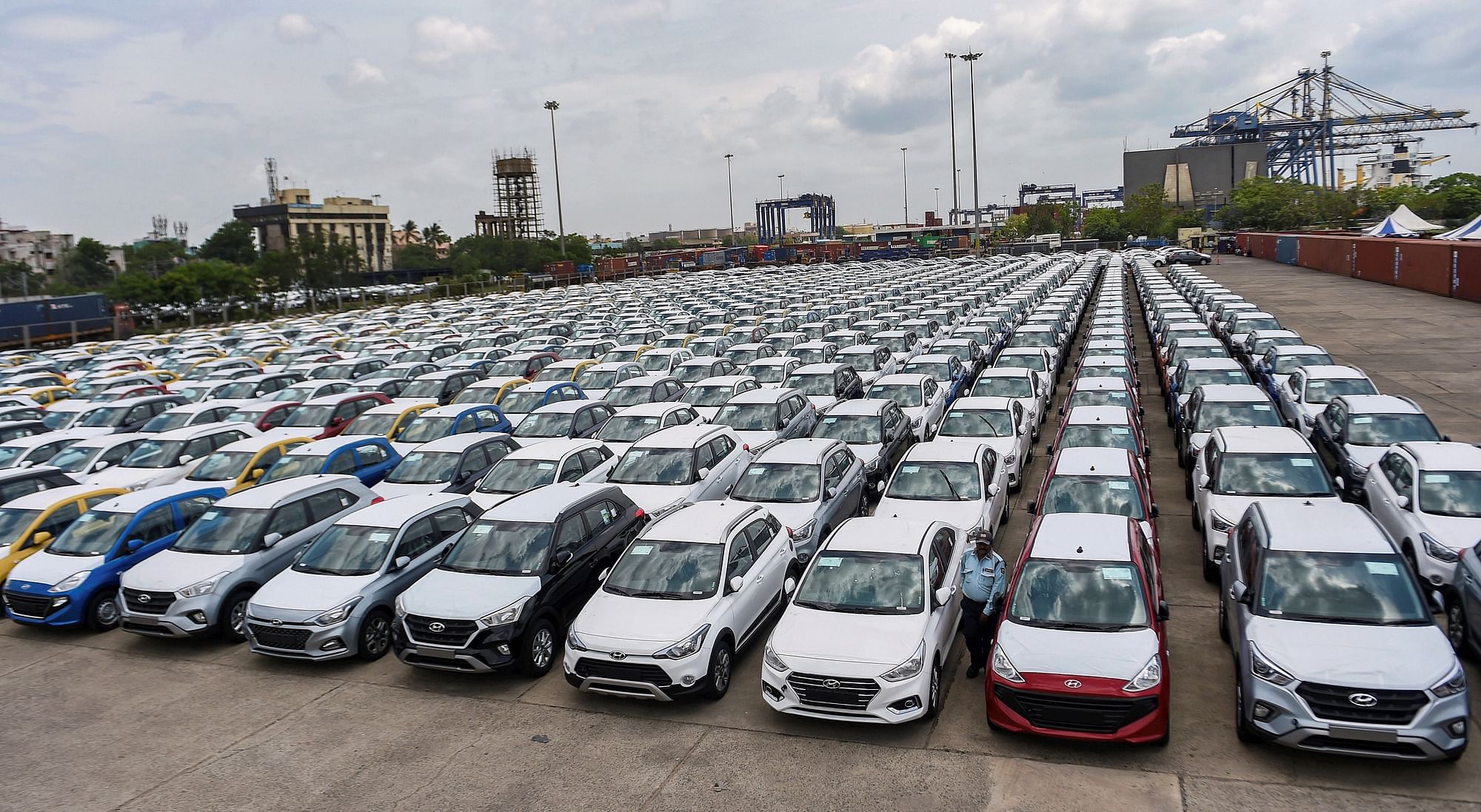 In this Friday, Aug 23, 2019, photo cars are seen parked in a dock at the Chennai Port Trust. Automobile sales in India witnessed its worst-ever drop in August with despatches in all segments, including passenger vehicles and two-wheelers, continuing to plummet as the sector reels under an unprecedented downturn, industry body SIAM reported on Monday, Sep 09, 2019. |

Similarly, sales of compact segment, which includes models such as Swift, Celerio, Ignis, Baleno and Dzire, declined 1.8 per cent to 76,630 units as against 78,013 units in November last year.

However, sales of its utility vehicles, including Vitara Brezza, S-Cross and Ertiga, rose 2.4 per cent to 23,753 units as compared to 23,204 in the year-ago month, MSI said.

"The recently introduced all-new i20 has helped carry forward the festive momentum even in the post Diwali period for the company and facilitated a sales growth of 9.4 per cent in November over the same period last year," HMIL Director (Sales, Marketing & Service) Tarun Garg said.

The automaker would continue its efforts towards driving customer delight through innovative solutions thereby positively contributing towards the sustained growth of the domestic industry and economy, he added.

Tata Motors reported over two-fold increase in its sales in November at 21,641 units as compared with 10,400 units in the same month last year.

Powered by Seltos and Sonet, Kia Motors posted a 50.1 per cent increase in domestic wholesales at 21,022 units last month. The company had sold 14,005 units of Seltos in November 2019.

"Since the COVID-19 outbreak, we were quite hopeful about the festive month and the results are overwhelming. Not only urban, but customers from tier II, III, and IV markets too are acknowledging the need for personal mobility to maintain personal safety," Kia Motors India Managing Director and Chief Executive Officer Kookhyun Shim said.

While there is still a lot of uncertainty in the market due to the pandemic, the overall consumer sentiment has significantly improved and the company is all prepared to offer a safe and hassle-free ownership experience to customers, he added.

"We are expecting the market sentiment to improve more in the coming months and we are confident that we will be able to continue this positive momentum in future as well," Shim said.

Mahindra & Mahindra saw its passenger vehicle sales increase by 24 per cent to 18,212 units last month as compared to 14,637 units in the same period last year.

Honda Cars, on the other hand, reported a 55 per cent jump in its domestic sales in November at 9,990 units.

"The festive season this year was good for us with sales improving by 55 per cent in November and contributing to overall industry growth.

While the Amaze continues to show strong market performance, the all new City has been fueling the demand in the mid-size sedan segment since its launch and maintaining its leadership position month after month, he added.

"Although there are continuing challenges of pandemic and its impact on overall consumer sentiment, the rise in personal mobility is expected to help us sustain our sales momentum during the rest of fiscal year," Goel said.

Toyota Kirloskar Motor (TKM) posted a 2.4 per cent increase in domestic sales at 8,508 units in November. The Japanese automaker had sold 8,312 units in the domestic market in November 2019.

"The company has been witnessing a gradual yet steady recovery owing to factors such as pent up and festive season demand as well as the consolidation of the market at the lower end due to increasing preference for personal mobility amongst customers," TKM Senior Vice President Sales and Service Naveen Soni said.

An array of attractive offers and finance schemes have also helped the company to maintain momentum, thereby helping it achieve growth over wholesales when compared to the corresponding period last year, he added.

Similarly, Honda Motorcycle and Scooter India (HMSI) posted an 11 per cent increase in domestic sales at 4,12,641 units last month as compared with 3,73,283 units a year ago.

"If the second quarter was about stabilizing the automotive ecosystem, the third quarter is a bit about recovery. Backed by festive sentiments, Honda's retails crossed the one million units mark yet again in the two crucial festival months (October & November)," HMSI Director Sales & Marketing Yadvinder Singh Guleria noted.

Niche bike maker Royal Enfield reported 1 per cent increase in domestic sales last month. It sold 59,084 units in November as against 58,292 units in the year-ago period.