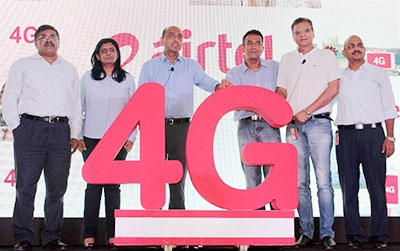 New Delhi : Becoming the first player to launch fourth-generation mobile telephony across the country, Bharti Airtel today began its high-speed data offering in 296 towns ahead of the much-awaited entry of rival Reliance Jio.

The company has 4G spectrum in 14 circles while Reliance Jio is the only player to have these airwaves in all the 22 telecom circles. Reliance Jio, part of India’s richest person Mukesh Ambani-led Reliance Industries group, is expected to launch its 4G services towards the end of the year.

Airtel also announced a tie-up with Samsung and Flipkart for offering 4G handsets. More such partnerships with other players will be announced in near future.

To opt for Airtel 4G, customers would have to switch to a 4G SIM. Airtel said it will offer 4G at 3G prices. “Airtel customers can enjoy 4G at 3G data prices with packs starting at Rs 25. In addition, with every 4G SIM swap, Airtel is offering six months of unlimited music streaming and downloads on ‘Wynk Music’ and five free movies per month for six months on the Eros Now channel of ‘Wynk Movies’,” the company said.

Vittal said Airtel is talking to various handset makers for the past one year on shaping the device ecosystem for 4G. He, however, refused to comment if the company will come with Airtel branded handsets.

Vittal said the company has increased the number of 4G mobile  sites three times in the last 60 days to provide better  services to customers.

Airtel invested Rs 1.10 lakh crore in the last five years of which Rs 50,000 crore was spent in last two years, primarily on spectrum and infrastructure. It got 4G spectrum in 2010. It first launched 4G services in Kolkata in April 2012 and since then expanded to various cities and towns.

Asked about competition from Reliance Jio and others, Vittal said Airtel has always survived in competition. “We are children of competition in a way and we work in brutal marketplace and that makes us better and sharper.”

Reliance Jio, which is now present in all 29 states with a direct physical presence in nearly 18,000 cities and towns, is testing its 4G network before the commercial launch.