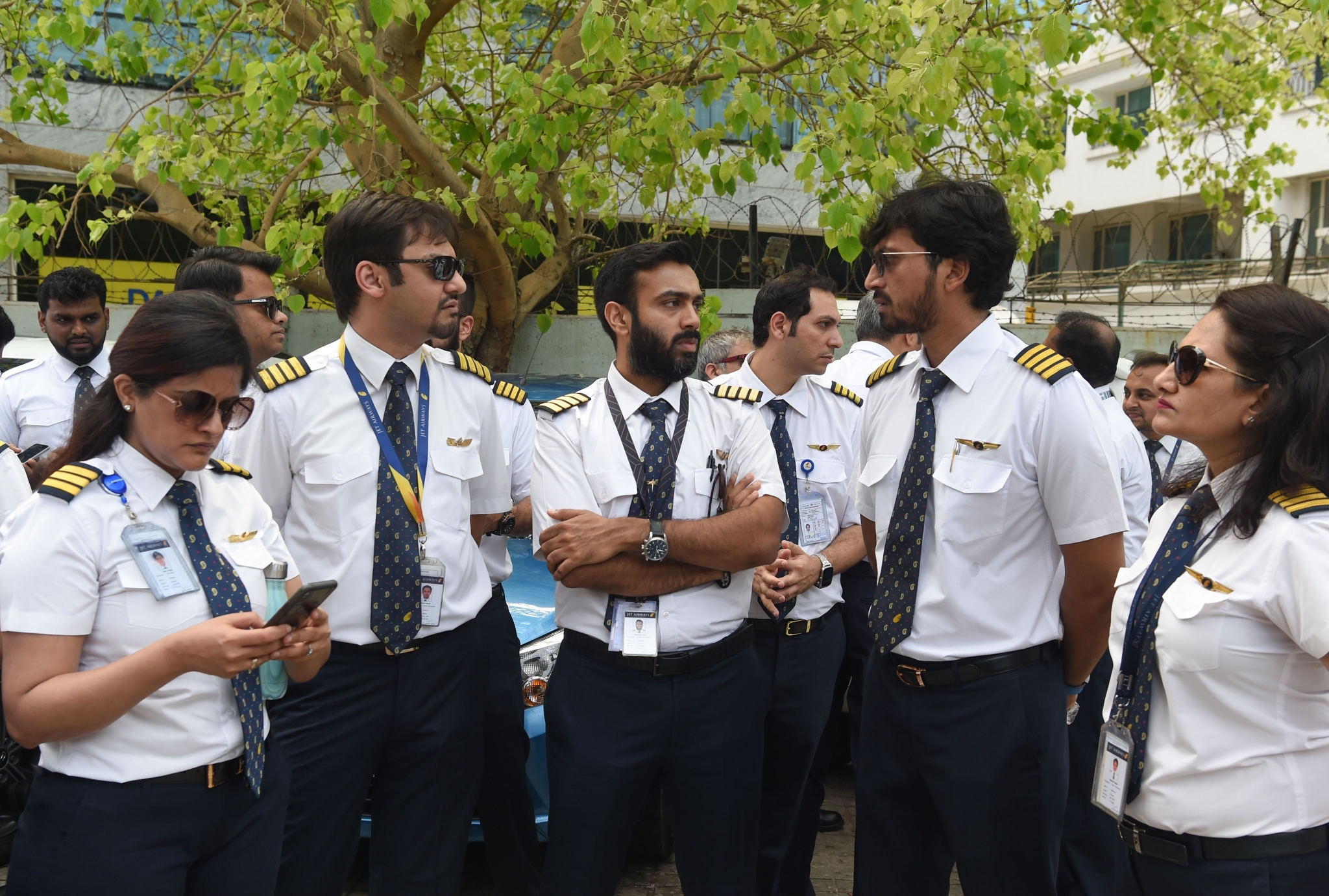 India's Jet Airways pilots gather at its head office in Mumbai on April 15, 2019. - Jet Airways' lenders were to meet on April 15 to decide whether to release crucial funds to keep the stricken Indian carrier flying as it teeters on the brink of collapse. (Photo by PUNIT PARANJPE / AFP) |

Chennai: The banks can lend some money to Jet Airways specifically for the purpose of paying employee salaries, a major bank employees’ union official said on Monday.

This amount can be lent by the consortium of lenders to the financially crippled Jet Airways on a lien against the airline employees’ provident fund balance or gratuity, C.H. Venkatachalam, the General Secretary of the All India Bank Employees’ Association (AIBEA), the largest union in the banking sector, told IANS.

“The consortium of banks not extending further financial assistance to Jet Airways is right. However, the banks can extend a loan to Jet Airways only for the purpose of paying the salaries to employees,” he said.

“Since the future of the Jet Airways is not clear, banks should clearly mention that the money lent is to be used only for payment of staff salaries subject to banks having a lien on the airline employees final dues like provident fund, gratuity.”

According to Venkatachalam, if the airline gets a new promoter and continues to employ the staff, then the sum lent by the banks towards paying salaries can be recovered.

“If there are no buyers for the airline, then the bank dues have to be settled by the airlines first before making the final settlement to their employees,” he added.

National Aviators Guild (NAG), which is the pilots’ union of Jet Airways, has said that a sum of Rs 175 crore is needed to pay employee salaries. The NAG, however, has not volunteered to take any pay cuts.

“The banks need not be concerned about how much should be paid as that is between the Jet Airways management and the employees. However, banks need not pay for the full salaries, but only towards some subsistence allowance on humanitarian consideration,” Venkatachalam said.

He also said the salaries can be paid for the months the Jet Airways was operational, and there need not be any payment for the period after the airline was grounded last Thursday.

“Our stand is that workers should not be left in the lurch. If some money is lent to Jet Airways towards staff salaries then it could be a precedent,” Venkatachalam added.