Due to the strong demand for its electric scooter Chetak, Bajaj Auto intends to expand the model's sales infrastructure to 75 locations nationwide during the current fiscal year.

Due to the strong demand for its electric scooter Chetak, Bajaj Auto intends to expand the model's sales infrastructure to 75 locations nationwide during the current fiscal year.

The Pune-based firm had brought back its iconic Chetak scooter in electric avatar in October 2019.

"Seeing the enthusiastic demand for this iconic model, the company has increased the touchpoints to 20 locations in FY 2022. This is expected to grow to 75 in FY 2023," the company said in its Annual Report for 2021-22.

Initially, Chetak was sold from only two locations, Pune and Bengaluru. The company noted that when bookings for the model were first rolled out in early 2020, it had to be stopped on account of COVID.

"When we restarted online bookings on April 13, 2021, we had to stop 48 hours later, owing to overwhelming demand," it noted.

During the last fiscal, the company said it has sold 8,187 units of the e-scooter.

"We are committed to the development of Electric Vehicles (EVs). Chetak is the first example. The setting up of Chetak Technology Ltd as a fully owned subsidiary of Bajaj Auto will aid in the research, development, production and sale of EVs," the company stated.

These are the vehicles of tomorrow and we want to be an active player in this space, Bajaj Auto informed shareholders.

"There is no doubt in my mind - nor should it be in yours - that Bajaj Auto has a complete suite of profitable two-and three-wheelers that can significantly increase the domestic and international market share and earn higher sales, revenues and profits.

"However, in all my years as a fiduciary of your company, I have never seen it face such a global supply constraint that it has in terms of the sheer scarcity of semiconductors," he said.

No modern automobile can exist without a slew of semiconductor chips. Motorcycles and top-of-the-line EVs like the Chetak are no exceptions, Bajaj said.

"It is difficult to predict when this supply scarcity will end. But till then, this will constrain your company's production volumes, as it will for all other automobile manufacturers," Bajaj stated.

All advanced technology components like the ABS system, FI systems, advanced displays like Thin Film Transistors (TFT), telematics and critical sensors have been affected due to the chip shortage, the company said.

R&D is working hard to create alternate configurations and homologating these as soon as possible, it added.

"Between FY 2019 and FY 2022, domestic motorcycle sales for the industry as a whole has fallen by almost 34 per cent in terms of volume. In this environment, Bajaj Auto has been able to arrest its decline in sales and raise market share from 18 per cent in FY 2021 to 18.2 per cent in FY 2022," it noted. 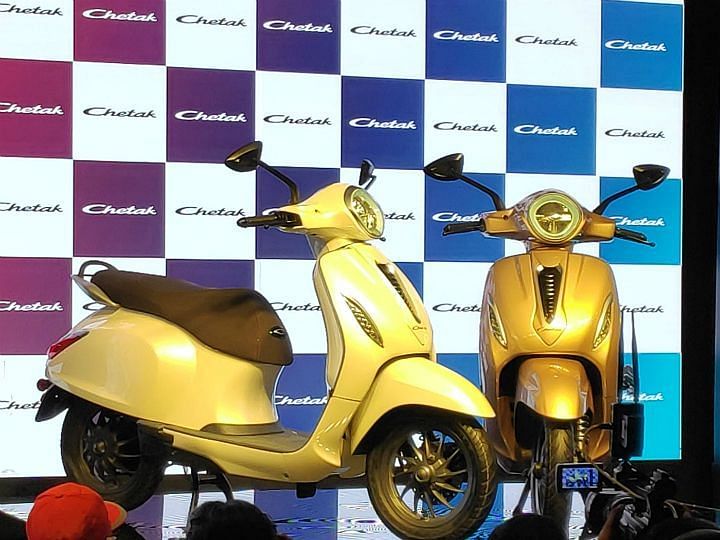