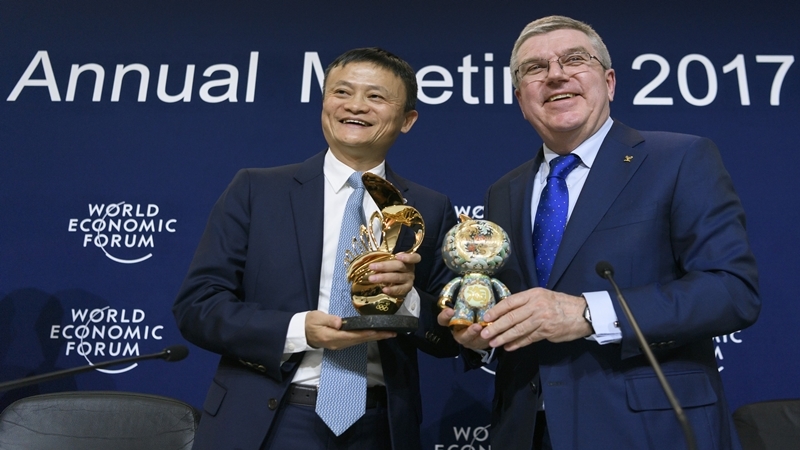 Hong Kong: Chinese online retail giant Alibaba surged Tuesday as it drew back the curtain on a Hong Kong listing the firm described as a vote of confidence in the embattled city.

The long-delayed trading day got off to a glitzy start with chief executive officer Daniel Zhang joined on stage at a stock exchange ceremony by dignitaries including city Financial Secretary Paul Chan and former Hong Kong chief executive Tung Chee-hwa.

Soon after the gong was sounded, Asia's most valuable company soared almost eight per cent, a bright start after a blockbuster initial public offering that has raised at least USD 11 billion, making it the city's biggest in nearly a decade.

"On the occasion of (Alibaba's) 20th anniversary, we have ushered in an important milestone, which is to come home, come back to Hong Kong for listing," Zhang said at the ceremony as crowds clapped and cheered.

The listing comes as a major boost to Hong Kong, which has been wracked by months of sometimes violent protests and the China-US trade war, sending the economy into recession.

In a sign of the tensions that still permeate the city after some of the worst violence of the unrest, riot police were stationed outside the exchange on Tuesday.

With 500 million shares offered to investors, the company raised HK dollars 88 billion (USD 11 billion) in the IPO, the highest since AIA garnered USD 20.5 billion in 2010. If it chooses to use an over-allotment option to sell a further 75 million shares, it could bring in HK dollars 101.2 billion (USD 12.9 billion).

Numbers play a key role in the listing. Eight is considered an auspicious number in China and its stock code is 9988, which translates as "long-standing prosperity".

The Hong Kong IPO is expected to curry favour with Beijing, which has sought to encourage its current and future big tech firms to list nearer to home after the loss of Alibaba and Baidu to Wall Street.

Plans for an Alibaba listing in Hong Kong broke down in 2013, in part because the city's listing rules prevented founder and then-boss Jack Ma from retaining some control over the board of directors.

Alibaba then wanted an alternative class share structure to give selected minority shareholders extra control over the board, but the Hong Kong bourse declined to change its rules.

It listed in New York in 2014 in a world record USD 25 billion offering.

Since then, the Hong Kong exchange has tweaked the rules to allow double listings, while Chief Executive Carrie Lam had also been pushing Ma to sell shares in the city.

Mainland authorities have also stepped up moves to attract such listings, including launching a new technology board in Shanghai in July.

"We came home. We came back to list in Hong Kong," Zhang said. "It helped make up for our regret five years ago." Asked whether the firm was planning to sell shares in mainland China, Zhang told reporters: "Hong Kong is a new starting point, but certainly not the end." Observers said the introduction of Alibaba could prove a boon for the exchange, which has had a torrid year that also saw it forced to drop a USD 40 billion takeover bid for the prized London Stock Exchange Group, which would have created a global markets titan.

"Alibaba will be the leading light for bringing more companies in," Andrew Sullivan, a director at Pearl Bridge Partners, told Bloomberg Television.

"You may see some new money being allocated." Li Xiaojia, chief executive of the Hong Kong Exchange, said: "The return of Alibaba, especially the return of new economic leaders, along with already locally listed, highly successful large companies such as Tencent, will certainly paint a new, beautiful picture for the Hong Kong capital market."