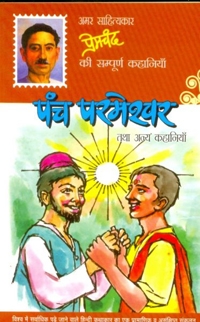 Panch Parmeshwar is a work that goes beyond  simplistic reading…it explores…the indigenous, village centric system of justice that caters to the needs of the illiterate and the poor in India

It is, perhaps, surprising that I select just one short story to elucidate concepts, which resonate emotionally and intellectually, and inspire debate, even acrimonious debate. It has a story behind it. Some years ago, I received an email from an Indian postgraduate student in France who, while talking about the link between literature and society denounced the didacticism that marks a certain kind of ‘committed’ literature and referred to one ‘s***ty story’ by Premchand, which he said, was a facile attempt to project Hindu-Muslim unity.

He did not remember which story it was, and vaguely remembered that it was one in which two friends – one a Hindu and the other a Muslim – dispense justice, which leads to a break in their friendship, and later on to a reconciliation. That story was Panch Parmeshwar.

That set me thinking: here is a person, who in his Euro-centric utopia, dismisses all things Indian, for whom literature is an artefact, perhaps, and didacticism and moralising are unpardonable crimes; one who would, probably, ten years down the line, come back to the ‘richness’ of Premchand’s literature via the European and American academia, and invent a more ‘contemporary’, erudite and politically acceptable term for his didacticism. Meanwhile, I felt that I needed to re-evaluate my own perception of the story, and whether in my so-called nativist stance, I was not over estimating it. And I read it again. And again.

Yes, it is about Hindu-Muslim friendship, about how friendship surmounts religious barriers; yes, there is a great deal of sentimentality attached to the narration; there is also the writer’s idealised vision that power brings responsibility – which is what my friend remembered from his reading of it, probably in his school days. But, that is not all that there is to it. We often talk of facile creative writing, forgetting that, more often than not, critical comments can be facile too.

Panch Parmeshwar is a work that goes beyond this simplistic reading. Let us take the concept of justice it explores, and the sanctity of the seat of justice, represented by the panchyat – the indigenous, village centric system of justice that caters to the needs of the illiterate and the poor in India; they do not have access to state sanctioned legal machinery, as Khala Jaan, the old maternal aunt of Jumman Sheikh states.

This system of justice depends on two concepts – first, justice is not revenge, it is for the greater social good, based on the principles of goodwill and fair play in the Rawlsian sense; secondly, it presumes that the voice of the panchayat is the voice of God, and the Panch are invested with a spark of divinity when they occupy this exalted seat of power. Premchand’s story rises above the ordinary because it shows that it is the seat of justice that instills the spark of divinity in human beings who are not perfect – who are otherwise capable of cruelty, insensitivity and injustice in their everyday life.

So, Jumman Sheikh, who is the Sarpanch in the Algu Chaudhuri’s case, his friend/ enemy, is capable of tremendous cruelty to Khala Jaan, divesting her of her right to a decent living, being the usurper of her property. Similarly, Algu Chaudhuri is not a paragon of virtue either. It is with great reluctance that he agrees to become the Sarpanch in the Jumman Sheikh-Khala Jaan case; and before the case comes up for hearing, he does not feel the need to use his goodwill with his friend to intercede on behalf of the old woman who has been deprived of her basic human necessities. The point that Premchand is making is, that ordinary human beings can rise above their pettiness when they are invested with authority and responsibility.

Panch Parmeshwar is also about the exploitation of the underdog, and women and the elderly become the most obvious representatives of it. It is about property relations. A woman can be persuaded to surrender her property and, then, is ill treated by the beneficiaries, in a society, which theoretically prescribes reverence to the elderly, and in actual practice, treats them as unproductive and unnecessary burdens – this is the highlight of the story.

The general bias against women in patriarchy forms its subtext: Jumman’s wife, Kariman, has internalised the patriarchal ideology so completely that she joins forces with her husband against Khala Jaan. The three women in the story, Kariman, Algu’s wife and Samjhu Sahu’s wife are shrill and quarrelsome and they need to be tamed by their husbands.

There is just one telling sentence in the whole story which points to this aspect, speaking volumes for the economy of expression and the sense of irony that is intrinsic to any Premchand story: when Kariman and Algu’s wife get into a quarrel, after the bullock that Algu had sold to Sahu dies, the husbands have to intervene and Premchand says, “Algu, instead of explanations, used the logic of his stick.” It will be difficult to find a more effective, precise, condensed and understated portrayal of domestic violence in literature than this one, single, satiric sentence.

Cruelty is the single keyword that infuses this story – cruelty of the human world.  Cruelty directed by human beings to all those who are weak and underprivileged – be they human or animals. The graphic account of the cruelty of Sahu to the bullock which he buys from Algu, which eventually kills the animal, could well be an illustration of what George Orwell depicts in his Animal Farm. Overwork, exploitation, starvation, physical violence – this is the lot of the poor beast, and it becomes a potent symbol for the exploitation in the human world, too.

True, the story ends with a sentimental reconciliation between the two friends, with each of them having proved that they are capable of rising above their pettiness and self-centred existence when invested with power and authority. This forms the basic humanism of Premchand’s vision: that human beings may cruel and exploitative by nature, but their humanity resides in their ability to rise above their beastly nature.

It is not that he would not be aware of the corrupting and dehumanising nature of power, again, as Orwell demonstrates in his satiric novel, but his vision is wide enough to accommodate the regenerative belief that power can make a flawed human being, living in a hostile social system, responsible and just. The leap of faith that is the crux of enduring literature.

(The story Panch Parmeshwar is widely known, much anthologized in English and Hindi. I have referred to “Premchand: The Co-wife and Other Stories” translated by Ruth Vanita and published by Penguin India in its Modern Classic Series. In this edition it has been translated as “The Voice of God” but I have retained the original, more well-known, Hindi title.)