According to a video shared on Instagram, Kartik helped Kiara while she fixed her dress in presence of numerous cameras.

For the event, Kiara wore a red mini dress which she paired with a oversized blazer. As it was a short dress, Kiara asked for Kartik's help before she stood up. In the video, the actress can be seen saying something to her co-star. Kartik then got up from his chair and stood in front of Kiara while she got up.

Moments after the video surfaced online, fans called Kartik a 'gentleman' and several users also said that the incident reminded them of the late actor Sushant Singh Rajput.

For those unversed, Sushant had done something similar for his 'Raabta' co-star Kriti Sanon. Sushant and Kriti were at a promotional event for their film when he stood in front of her so she could sit down in her mini-skirt.

A fan commented on Kartik and Kiara's video, "Reminds me of Sushant Singh Rajput."

The film has been produced by Bhushan Kumar, Murad Khetani, Anjum Khetani and Krishan Kumar under the banner of T-Series and Cine 1 Studios. It is scheduled to hit the screens on May 20, 2022.

Read Also
'Bhool Bhulaiyaa 2': Kartik Aaryan-starrer's title track to be out on May 2 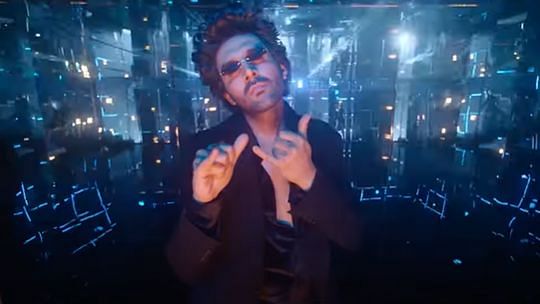