From people being left in tears to waving the Indian flag, praises have been pouring in for Adivi from every part of the country

Telugu star Adivi Sesh, who was in the capital for the promotion of his new movie 'Major' received an emotional response at the screening.

From people being left in tears to waving the Indian flag, praises have been pouring in for Adivi from every part of the country.

Earlier, Adivi stated that the kind of response he received in different cities in a few moments are even bigger than getting Oscars for him.

He also spoke about the fear that if the movie is being screened days before its release: "Anyone can review and say negative about it on YouTube so this is a major risk factor but still we did it for the audience."

Adivi said while portraying a character like Major Sandeep, one needs a lot of preparation not only physically but mental also.

He shared: "The effort was to understand him rather than get into the role. Moreover the movie requires a lot of weight changes that our director decided to do. From 84 Kg to 81 Kg, 79 kg to 73 kg. Back to 81 kg and again back down to 76 kg.And also I have to act like a guy who is not filmy and do the action."

"Rather I have to actually move like a soldier and move smoothly. Or move like you've been training for 15 years. It's a very difficult process. Not to mention I'm left handed and somebody like me who is left handed had to do firing with the right hand as Major Sandeep used to do. It was not at all easy."

The bilingual film 'Major' has been shot in Hindi, Telugu and will release in Malayalam as well. It also stars Sobhita Dhulipala, Saiee Manjrekar, Revathi, Prakash Raj, Anish Kuruvilla and Murali Sharma.

Produced by Sony Pictures International Productions in association with Mahesh Babu's GMB Entertainment and A+S Movies, 'Major' is directed by Sashi Kiran Tikka and will release on June 3. 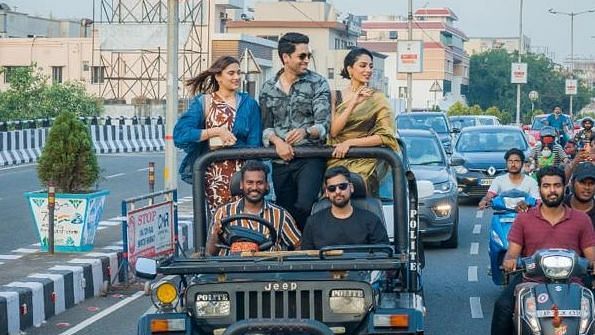