Priyanka is currently busy shooting for her upcoming series 'Citadel'.

It is said that you can take a person out of India, but you can't take India out of a person, and Priyanka Chopra is a perfect example for this. Even though the actress now lives in the US with husband Nick Jonas and their family, she never misses a chance to flaunt her Indian roots, be it by dancing to Bollywood numbers or binging on desi delicacies.

Recently, PeeCee threw a suprise birthday bash for her manager Anjula Acharia in Los Angeles and a video from the party is going viral on the internet. In the clip, the actress can be seen dressed in a green jumpsuit as she brings in the birthday cake for her manager.

But what caught the attention of her fans was that Priyanka can be seen dancing to the beats of a dhol in the video. As soon as she enters with the cake, a man is seen playing the dhol, and without wasting a minute, the actress starts shaking a leg as people around her cheer for her.

Husband Nick Jonas, who is a fan of Bollywood music and dance himself, is also seen next to his wifey dearest in the video.

Anjula also shared a heartfelt note for PeeCee along with a number of inside pictures from her birthday bash. "@priyankachopra @nickjonas I’m so overwhelmed and grateful for all the love you showed me this birthday, it was an amazing surprise and so unexpected!! You’re both so generous and warm hearted, I can’t thank you enough!" she wrote.

Meanwhile, Priyanka is currently busy shooting for her upcoming series 'Citadel'. It also stars 'Game of Thrones' fame Richard Madden, and it's being helmed by the Russo brothers of the ‘Avengers’ fame.

Besides 'Citadel', Priyanka will also feature in romance drama film 'It's All Coming Back to Me' and return to Bollywood with Farhan Akhtar's directorial 'Jee Le Zaraa', also starring Katrina Kaif and Alia Bhatt. 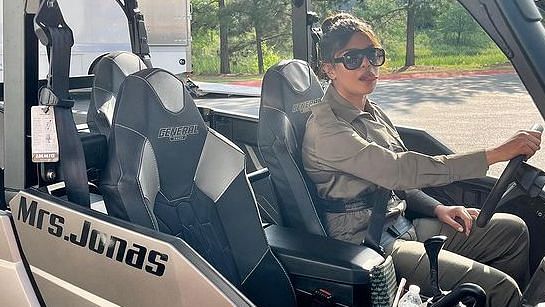