Abhimanyu Dassani, who will be next seen in the upcoming film 'Nikamma', has been working hard to impress the audience, be it with his acting chops or on the dance front.

The actor recently took to his Instagram handle to share a video of himself shooting for a song in the sweltering heat. In the video, he can be heard saying that even though the temperature was 39 degree celsius, it feels like 45 degrees.

He added that he has just slept for three hours and is ready to shoot the song. 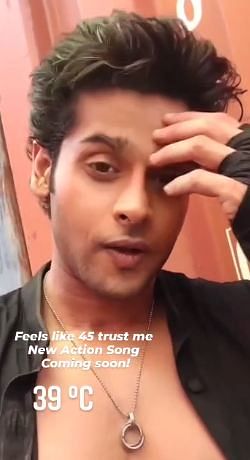 "Feels like 45 trust me. New action song coming soon," he captioned the video.

The trailer, as well as the title track of the film, were dropped a few days ago, and both have received positive response from the masses.

Revolving around the story of Adi, played by Abhimanyu, the film traces the transformation of a carefree, jobless slacker to a responsible and reliable person when trouble befalls his family.

After 'Nikamma', Abhimanyu will be next be seen in the family comedy entertainer 'Aankh Micholi', starring Mrunal Thakur, Paresh Rawal, Sharman Joshi amongst others.

Tension in Udaipur after beheading of tailor over his post supporting Nupur Sharma, CM Ashok Gehlot...