While Ranbir and Alia are vacationing in the Maldives, Neetu Kapoor has made her new feline friend

Veteran actor Neetu Kapoor introduced fans to her 'new friend' on Sunday and it's none other than Alia Bhatt's gorgeous Persian cat Edward.

Seems like Alia and Ranbir Kapoor's family members have gotten well acquainted with each other including their pets!

While the couple has been vacationing in the Maldives, Ranbir's mother Neetu has made her new feline friend and it is Alia's white kitty- Edward.

Introducing her 'new friend', the Kabhi Kabhie star took to her Instagram stories and posted a picture of the Persian cat winking at the camera.

Alongside the adorable snap, Neetu wrote, "My new friend Edward. Friendship that started with a wink." She also added growing hearts, a wink and a cat emoticon with the caption. 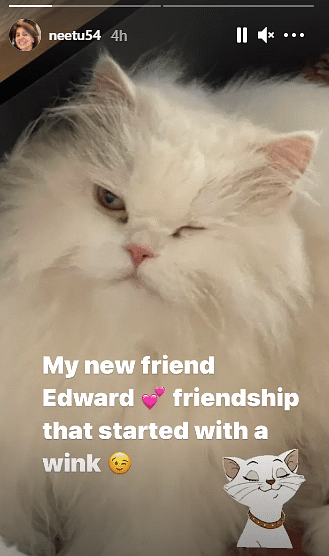 On a related note, Alia and Ranbir who have recently recovered from COVID-19 have been spending time together in the tropical beauty of Maldives.

Ranbir, who was last seen in Bollywood actor Sanjay Dutt's biopic titled Sanju, will be featuring in Karan Malhotra's directorial Shamshera. He will also star in Animal, being helmed by Sandeep Reddy Vanga.

On the other hand, Neetu will be making her comeback on the silver screen through Raj Mehta's directorial Jug Jugg Jiyo. Produced by Karan Johar's Dharma Productions the romantic drama also stars veteran actor Anil Kapoor, Kiara Advani, and Varun Dhawan in the lead roles.