Advertisement
Home / Entertainment / Bollywood / Koffee with Karan: Not Ranbir Kapoor, but Alia Bhatt to appear on Karan Johar's show with THIS actor

Koffee with Karan: Not Ranbir Kapoor, but Alia Bhatt to appear on Karan Johar's show with THIS actor

Karan Johar recently announced that one of his most controversial shows 'Koffee with Karan' will stream exclusively on Disney+ Hotstar.

If reports are to be believed, 'Rocky Aur Rani Ki Prem Kahani' actors Alia Bhatt and Ranveer Singh will be the first guests on the show.

According to a report in Pinkvilla, Ranveer and Alia are all set to shoot next week. A source close to the development revealed to the news website that Alia and Ranveer will be shooting for their episode around May 10 in Mumbai.

This may be the first time that Alia might talk about her wedding with Ranbir Kapoor and even her Hollywood debut with Gal Gadot. It was earlier reported that Alia and Ranbir will be the first guests on the show and will talk about their love affair and how they fell in love with each other and who proposed whom and how.

Karan will reportedly commence the shoot of the show after wrapping up a major chunk of his upcoming directorial 'Rocky Aur Rani Ki Prem Kahani'. 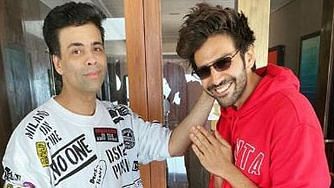