Ishan, who has appeared in shows like 'It's Not That Simple 2' and 'Laakhon Mein Ek 2' is all set to make his film debut with 'Janhit Mein Jaari'

Actor Ishan Mishra, who has appeared in shows like 'It's Not That Simple 2' and 'Laakhon Mein Ek' season 2 is all set to make his film debut with Nushrratt Bharuccha's 'Janhit Mein Jaari'. The film is all set to hit the big screens on June 10.

The Free Press Journal caught up with the actor for an exclusive interaction. Opening up about his first Bollywood film and his role, Ishan says, "I am playing an interesting part called Achaanak in the film who is also a condom company salesman. I would rather wait for a few days for the film to release and watch the response. The film has been made with utmost honesty and hard work from all the departments."

The actor is extremely nervous about his Bollywood debut. He shares, "I have no idea how it is going to come out. Will the audience like it or what I should have done differently. There are many thoughts striking my mind but the way the entire film has been shot, I am pretty sure that the audience will receive it with open arms and love it."

Ishan also reveals why he decided to make his debut with this film. "Janhit Mein Jaari is an idea that has never been touched and everyone needs to speak more and more about the same. And Raaj Sir’s (Raaj Shaandilyaa) script and the idea of storytelling are a plus for any actor to begin his journey. Also, you are a part of a story that gives an important social message. I feel blessed to be a part of the film."

Ishan was all praise for his co-actor Nushrratt. He says, "Nushrratt is a fantastic actor and a great person. It was a wonderful experience working with her and you really get to learn a lot while watching her perform."

Elaborating on shooting for the film in Gwalior, his hometown, Ishan says that the experience was surreal. "That was the best thing about being a part of this film. I was shooting where I have lived for years. Maharaj Bada is the heart of Gwalior and we shot for a good number of days there. Plus you can suggest and make everyone eat some of the tastiest food as you know everything about the place. My mother also visited the location a couple of times and brought lunch for me and others. What more can you ask for," he gushes.

Ishan, an engineer, worked with global giants for several years before he decided to step into the entertainment industry. He reveals why he left his job and took up acting. "When I was working as a radio jockey during my engineering days, I developed an immense interest in voice acting and audio productions and decided that I have to follow what my heart says. When I got placed after engineering, I moved to Pune and started doing theatre alongside. Then I had to move to Stockholm for a short period and I had to take a break from theatre which I didn’t like, honestly. I came back and started it once again," Ishan shares. 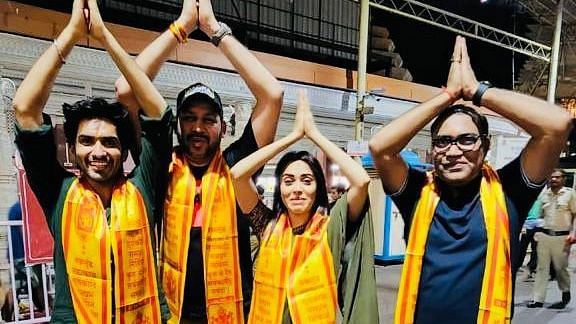 He adds, "There were times when it became difficult to carry on with both the things but I didn’t give up. The thought behind also was to secure some money as well because it is a field where you never know when would you start your career. You will have to wait. I have seen people coming to Mumbai with a time period in hand that they would have six months, one year, or two years. But it doesn’t work like that. If you are lucky, you can get work the next day too and then maybe for a year you won’t have work. But that's the beauty of the entertainment industry. You keep trying every day."

Meanwhile, Ishan will also be seen with Vijay Sethupathi and Vikrant Massey's 'Mumbaikar'. "I have shot for Mumbaikar which is directed by Santosh Sivan. We are waiting for the release date announcement of the same. I am also shooting for another unannounced feature film in MP which I will be able to speak about once it is announced," he concludes.

Read Also
'I am not the guy who will lie and make up things,' says Janhit Mein Jaari debutant Anud Singh Dhaka