COVID-19 surely didn’t affect the spirit of two people in love who decided to break barriers and tie the knot.

The outbreak of novel coronavirus may have dampened our idea of big fat Indian weddings, but it surely didn’t affect the spirit of two people in love who decided to break barriers and tie the knot amid this pandemic.

From Neha Kakkar to Rana Daggubati – here’s a list of celebs who got married in 2020.

Veteran singer Udit Narayan’s son Aditya married his "Shaapit" co-star Shweta Agarwal. When asked about moving into his new home, Narayan said, “I have bought a new 5 BHK in Andheri itself, three buildings away from my folks and we are moving in 3-4 months from now,” adding that he has been saving for years.

Amid the entire country divided over the concept of ‘love-jihad’, popular television actor Shaheer Sheikh has tied the knot with his long-time girlfriend Ruchikaa Kapoor. The couple settled for a court marriage given the ongoing COVID-19 pandemic. However, they have planned for a traditional wedding in June 2021. Neha Kakkar tied the knot with singer Rohanpreet Singh in October. During her appearance on the reality show ‘Bigg Boss’, Neha mentioned that she met Rohanpreet on the sets of their song ‘Nehu Da Vyah’.

Priyanshu Painyuli married his long-time girlfriend Vandana Joshi in Dehradun. In sync with the Covid times, Priyanshu's wedding invitation contained a mask, hand sanitisers, PPE Kits, tablets, and air sanitisers amongst other things. "Amidst rising cases, we want our guests to be safe and feel secure. We want everyone to have a great time," Priyanshu said.

The "Baahubali" star got married to Miheeka Bajaj on August 8 in the presence of close family and friends. The close-knit yet glamourous affair was hosted at the Ramanaidu Studios in Hyderabad. In May, Rana made his relationship with Miheeka public.

A month after announcing her departure from the entertainment industry, TV and film actor Sana Khan tied the knot with Anas Saiyad in an intimate ceremony.

Actor Kajal Aggarwal tied the knot with entrepreneur Gautam Kitchlu in a private ceremony. "And just like that, from ms to mrs! I married my confidante, companion, best friend and soulmate. So glad I found all of this and my home in you @kitchlug #kajgautkitched," she wrote, alongside an adorable picture of herself and Gautam. Actress Prachi Tehlan got married to Delhi-based businessman Rohit Saroha on August 7 in New Delhi. Prachi said every safety measure was ensured at the celebrations.

"Health and safety of each and every human at the wedding is of utmost importance to me. That is why we have booked a venue that has a huge space. The idea is to make sure that guests do not come in close proximity to each other. Besides, we have invited them at an interval of 30 minutes to avoid crowding," she had said about her wedding.

Television stars Puja Banerjee and Kunal Verma had planned for a grand wedding in April, but had to stall due to the pandemic. On the same day, Puja took to her Instagram account to reveal that the couple had already had a court marriage one-and-half month back. They donated the amount they had set aside for their wedding.

Telugu actor Nikhil Siddhartha got married to his longtime girlfriend Pallavi Varma at a farmhouse in Hyderabad in May. The couple were earlier planning to get married in April but had to postpone the wedding owing to the lockdown. The wedding was attended by only a few family members of the bride and the groom.

Nikhil Gowda, Kannada actor and son of former Karnataka Chief Minister HD Kumaraswamy, got married to Revathi in April at a farmhouse near Bidadi in Ramanagara district amid the lockdown. It was said that the "wedding was simple without frills".

Niharika, daughter of producer Nagendra Babu and is the niece of southern superstars Chiranjeevi and Pawan Kalyan married Chaitanya Jv. 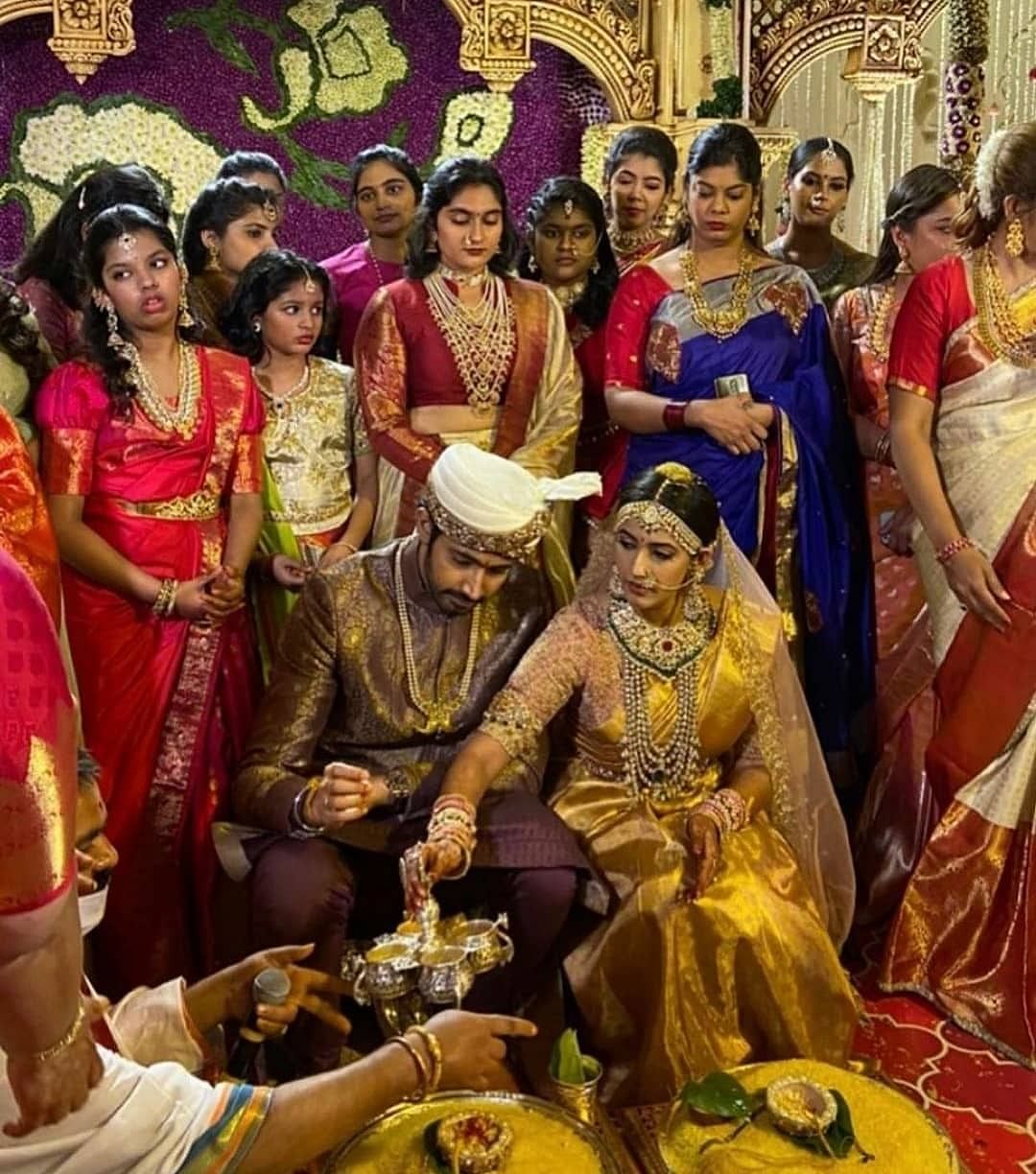