Amid reports of actress Athiya Shetty and her brother Ahan marrying their respective partners in 2022, doting dad Suniel Shetty has debunked the same.

It was a family affair when Athiya Shetty made her first red carpet appearance with cricketer boyfriend KL Rahul at her brother Ahan Shetty’s ‘Tadap’ premiere.

Not to mention, Ahan’s girlfriend Tania Shroff was also present to see her man mark his Bollywood debut.

Recently, a news report claimed that the Shettys will witness double wedding bells this year.

Reacting to the same, Suniel tweeted, “Saw this article by @Bollyhungama & unsure whether to be be pained or amused. Can’t understand the need to ‘scoop’ before verifying any facts at all. This type of irresponsible reportage is what dents the credibility of journalism. Come On #bollywoodhungama you’re better than this.” 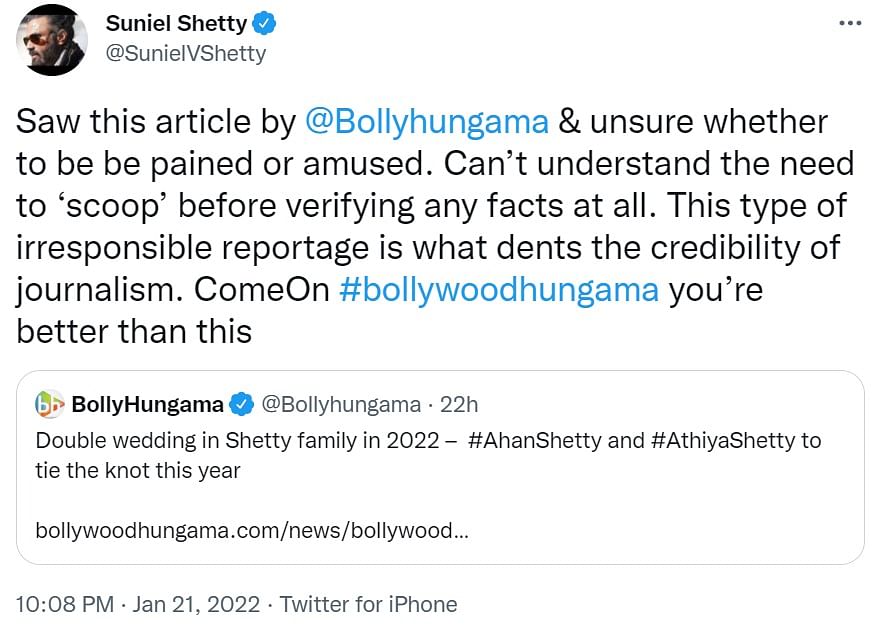 Ahan made his Bollywood debut with 'Tadap' which also stars Tara Sutaria, Kumud Mishra and Saurabh Shukla. It follows the story of a guy hopelessly in love, who turns vindictive along the course of the film after being abandoned.

Meanwhile, Athiya was last seen on screen in 'Motichoor Chaknachoor' with Nawazuddin Siddiqui.

On the other hand, Suniel will make his OTT debut with the web series 'Invisible Woman'.