Advertisement
Home / Entertainment / Bollywood / Did you know? Richa Chadha's character in 'Fukrey' was based on notorious flesh trader Sonu Punjaban

Did you know? Richa Chadha's character in 'Fukrey' was based on notorious flesh trader Sonu Punjaban

Did you know? Richa Chadha's character in 'Fukrey' was based on notorious flesh trader Sonu Punjaban |
Advertisement

Excel Entertainment's franchise 'Fukrey' became a cult classic after tickling the audiences' funny bones and taking them on fun filled roller coaster rides twice. The first installment of the Mrighdeep Lamba directorial released in 2013 and featured Pulkit Samrat, Ali Fazal, Richa Chadha, Manjot Singh, Varun Sharma in the lead roles. The cast once again reunited with the team for a second instalment in 2017. Both, 'Fukrey' and 'Fukrey Returns' were co-produced by Farhan Akhtar and Ritesh Sindhwani under their banner. While the 'jugaadu' boys Choocha, Hunny, Zafar and Lali left everyone in splits with their crazy tricks, Bholi Punjaban, a local don essayed by Richa Chadha is one of the most standout characters from 'Fukrey'. The eccentric character is so far among her most popular ones.

But, did you know that Richa Chadha's Bholi Punjaban character is loosely based on notorious flesh trader Sonu Punjaban?

Yes, Richa Chadha's character in the comedy franchise was inspired by Geeta Arora alias Sonu Punjaban, who was recently sentenced to 24 years rigorous imprisonment. During the promotions of 'Fukrey, Richa while talking about her character told India Today, "There was a girl in Delhi, Sonu Punjaban. My character is loosely based on her. She got criminally active at a very early age. By the age of 20, she was known in entire North India." 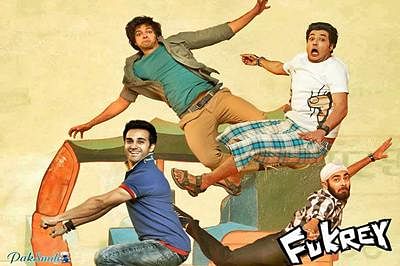 Speaking about the casting of the film, producer Farhan Akhtar had said, "Richa is the perfect casting for this character. She is someone with a really strong personality, a tremendous amount of character and a very strong sense of self-belief. She has that look, that if you mess with her, she will beat the crap out of you."

In 2017, when Richa Chadha was asked if she connects with her 'Fukrey' character Bholi Punjaban, she told IANS: "The only thing in common is that we don’t hold back because we are women… That’s all."

The actress, however, almost lost the role due to some miscommunication. Richa was initially misguided and misinformed about the character by someone, till she spoke to the casting director of the film Honey Trehan and resolved the misunderstanding, read a statement.

“I am glad Honey came to the rescue and connected me with Mrighdeep Singh Lamba (director) and Excel Entertainment (producers). Excel and I have a long association now and I love working with them. To think that this almost didn’t happen is scary in retrospect,” Richa told IANS. On Wednesday, the sex racketeer that inspired the reel life character was sentenced to 24 years rigorous imprisonment in a case of kidnapping and prostitution of a minor girl. The 12-year-old victim was kidnapped by Punjaban's associate Sandeep Bedwal on September 11, 2009 and was sold and re-sold to a score of people, including Sonu Punjaban, for the purpose of prostitution.

Sonu Punjaban used to administer drugs into the body of the victim to make it "more suitable for prostitution" and used to charge Rs 1,500 from customers. The minor girl was sold four times by different people and eventually ended up with Sonu Punjaban, who after using her for prostitution, sold her to three men.

Sonu Punjaban was convicted for commission of offences such as procuration of minor, slavery, selling and buying minor for prostitution, poisoning, wrongful confinement and criminal conspiracy under the Indian Penal Code and sections of the Immoral Traffic (Prevention) Act.