As per reports, the now deleted post featured, Anushka, Vamika and Virat Kohli as they returned from their Maldives vacation

Bollywood actress Anushka Sharma, who continues to maintain privacy of her daughter Vamika in the media, recently pulled up a publication for sharing her baby girl’s pictures online.

As per reports, the now deleted post featured, Anushka, Vamika and Virat Kohli as they returned from their Maldives vacation.

Anushka took to Instagram and commented on the post stating, "Seems like times group knows what's better for kids than their parents themselves as they can't stop clicking and posting photos despite being requested repeatedly. Learn something from other media houses and paparazzi."

Earlier this year, Anushka Sharma revealed that she along with her cricketer husband Virat Kohli were caught off-guard after images of their daughter went viral during India and South Africa's ODI.

This was the first time that Vamika's photos were seen anywhere, and immediately the images started doing the rounds on social media.

Kohli and Anushka had urged the media to not click Vamika's pictures to maintain the couple's privacy.

For the unversed, Virat and Anushka had earlier issued an official statement revealing the reason for keeping Vamika away from the limelight, "We have decided as a couple to not expose our child to social media before she has an understanding of what social media is and can make her own choice."

The couple became parents to their baby girl in January 2021.

Meanwhile, on the work front, Anushka has started shooting for 'Chakda Xpress', inspired by cricketer Jhulan Goswami's life and journey.

Hailing from a small town in West Bengal named Chakda, Jhulan developed an affinity for cricket despite various obstacles on her way. The movie revolves around the highlights of Goswami's career, from convincing her parents and breaking the stereotypes to her rise as one of the greatest Women's cricketers India has ever produced.

The film is slated to release in the second quarter of 2022 on Netflix.

Read Also
Photo: Anushka Sharma is a beach bum in black swimsuit - check out what makes her shy 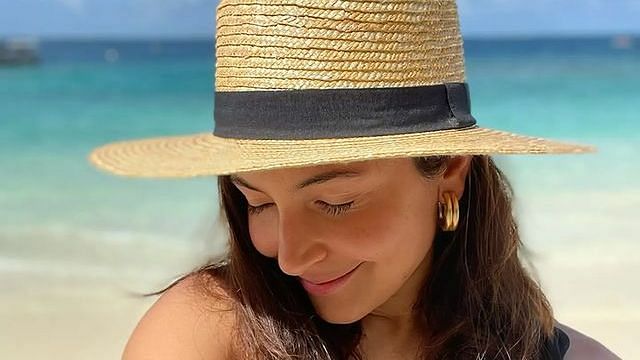