It checked all the boxes in its attempt to tackle desire and sexuality, feminism, casteism, class divides, marginalisation and disability, but sacrificed good storytelling at the altar of wokeness

Bollywood mainstream directors have taken to anthology films to narrate slice-of-life stories bordering on the abstract and the absurd. After Lust Stories and Ghost Stories, Netflix brings Ajeeb Dastaans (Strange Stories), which bears the sensibilities and aesthetics of a typical Karan Johar production, in this case the digital arm of Dharma, Dharmatic Entertainment. It ticks all the socially relevant boxes while keeping the woke audience in mind, but somewhat misses out on building a compelling narrative.

The film begins with Shashank Khaitan’s Majnu, a story on masculinity and desire. Babloo (Jaideep Ahlawat) is a rich heartland thug who’s forced to marry Lipakshi (Fatima Sana Shaikh). He tells his wife on their first night that he’s in love with someone else and he would never consummate their marriage and, in the same breath, he asks his wife to maintain the dignity of his family. The short tries to tackle sexual repression and desire, but poor characterisations fail storytelling. Without enough context, Lipakshi goes from Savita Bhabhi to Madame Bovary. The characters are used as mere plot points to drive the narrative, but their motives remain unclear.

Raj Mehta’s Khilauna is perhaps the weakest and the most ajeeb story of the quartet. It begins as a tale focusing on class oppression and body politics, but ends with (spoiler alert) a baby in a pressure cooker. The story is an example of why Bollywood needs more female scriptwriters who can create complex women for the screen without descending into farce. The domestic help (Nushrratt Bharuccha) sways her hips and casually flirts to land a job, but ends up a victim of sexual harassment. The film appears confused between sexual liberation and exploitation, and leaves an incomplete protagonist in its wake.

After sexual repression and class oppression, comes the story of caste and love. Neeraj Ghaywan’s Geeli Pucchi (Wet Kisses) shows that love can overcome sexual repression, but can’t win over caste bias. Konkona Sensharma plays Bharti, a Dalit factory worker, who has her eye on the role of a data operator. But the job ultimately goes to Priya Sharma (Aditi Rao Hydari). Friendship and love blossom between the two as long as caste is not mentioned. Priya, who’s the bahu of a conservative Brahmin family, doesn’t hesitate to profess her love, but fails to protect this love in the face of blatant caste discrimination. Love, however, is not blind; and Konkona seeks reparations as the woman scorned. What felt unnecessary was the doubling down on queer stereotypes, Konkona as the butch and Aditi as the femme lesbian. Queer women deserve better representation than plaid shirts and pom-poms on scooters.

Kayoze Irani’s Ankahi (Unspoken) has the most straightforward story in the anthology. Natasha (Shefali Shah) seeks solace in the company of a deaf-mute photographer, Kabir (Manav Kaul), while trying to cope with her daughter’s growing disability and an emotionally distant husband (Tota Roy Chowdhury). The film navigates loneliness, desire, acceptance and betrayal through the extensive use of sign language. The cheesy ending is the only jarring note in this sensitive story.

While there were many solid performances, the shallowness of the scripts and lazy characterisations made the anthology an uneven watch. It checked all the boxes in its attempt to tackle desire and sexuality, feminism, casteism, class divides, marginalisation and disability, but sacrificed good storytelling at the altar of wokeness.

Read Also
Pagglait review: This Sanya Malhotra-starrer is a moving tale of loss and acceptance 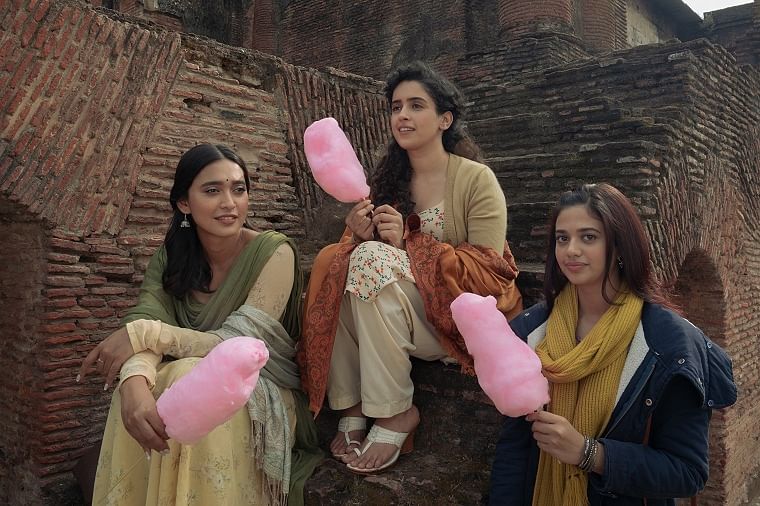